Marvel has always been masterful with storytelling, conveying engaging narrative and exuberant emotion alongside stunning visual portrayals. But at the start of every compelling story is the captivating comic cover that catches readers’ eyes and draws them in.

In MARVEL Puzzle Quest, we also strive to highlight characters with their most illustrative comic covers. That’s why we’re thrilled to have the chance to speak with Marvel artist John Tyler Christopher, who has created the cover art for comics such as New Mutants, Avengers: Solo, and even some that are in MPQ right this moment! 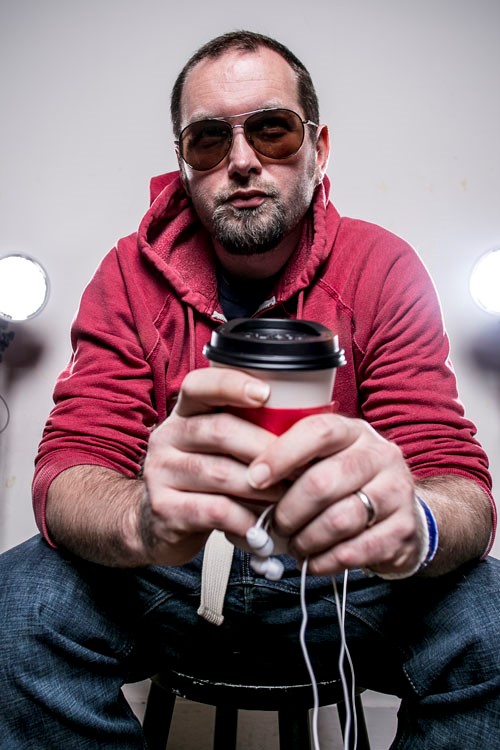 Check out our interview with him below:

Hey John! Thanks for taking the time to speak with us today.

The pleasure is all mine! I’m a big fan of the game, so I’m super jazzed to have an opportunity to talk about it.

First off, tell us a little about yourself?

I’m a farm boy from Lafayette, Indiana. I’m married to an amazing wife, and I have 2 wonderful children (the youngest loves to play MPQ). I’m a life-long video gamer from when my grandma got me a NES for Christmas, and I’ve been breaking multi-colored bricks ever since.

As a 90’s kid, I fell in love with comics and their art when I first saw X-Men #1; and I knew then what I wanted to be when I grew up. I’ve been living that dream as a MARVEL artist for about 10 years now. I’ve done work for about every book they have, but my favorite covers are the Action Figure covers for both MARVEL and Star Wars. On top of that, I also do box art for the MARVEL Legends toy line.

How long have you been playing MARVEL Puzzle Quest, and what prompted you to start playing?

I started playing back when Team-Up tiles were environment tiles (HOT DOG STAND!!!), and Sue Storm was the baddest character on the block. I was looking for a game to play as a break during work, something to just reset my head while I painted. At the time, it was one of the only MARVEL games on the App Store, so I thought I would give it a whirl. I was quickly impressed with how well the game translated each character into game mechanics.

As a cover artist, part of my job is finding a way to convey character, powers and history into a single image, so I’m always fascinated with how others do the same thing in different mediums. I fell in love with the way Cap’s shield returned, like it was ricocheting back; but the more I played, I realized that by having the ability to place the countdown, you could strategically control the battle, just like Captain America. It’s things like this that turned it from a fun distraction to something I look forward to playing.

We gotta ask this. What is your S.H.I.E.L.D. Rank, what is your favorite character in the game, and are there any game strategies that you have adopted?

My current rank is 113. I run with a champed team of 5-star Thanos, Doctor Strange & Old Man Logan; so the Storied Legends store really ate up my CP. I like to let Logan soak up as much damage as possible, while Strange controls the flow with Flames of the Faltine & the Crimson Bands, eventually allowing Thanos to punish with Come and Get Me. If the fight goes long, that usually gives OML the chance to SNIKT out and finish the fight.

I’m currently trying to max out Kitty Pryde & God Emperor Doom. I think it could be fun to have Doom feed her and OML black and yellow while tanking. Setting up Kitty to shield with Phase & Conquer, thus letting Logan drop some strikes. Once those are in play, let Kitty do what she does best (and once I can get that 633, it IS pretty).

I really like to experiment with different builds, so I’m looking forward to champing other 5-star characters to see how they play together.

Tell us a little about the 2 comic covers of yours we feature in MPQ?  What were the inspiration for their artwork? 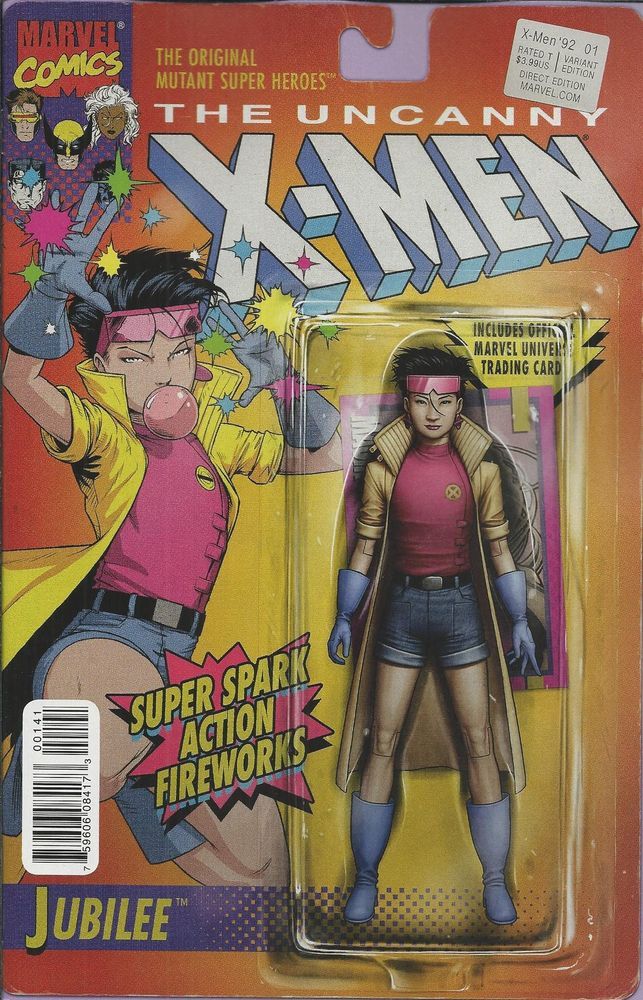 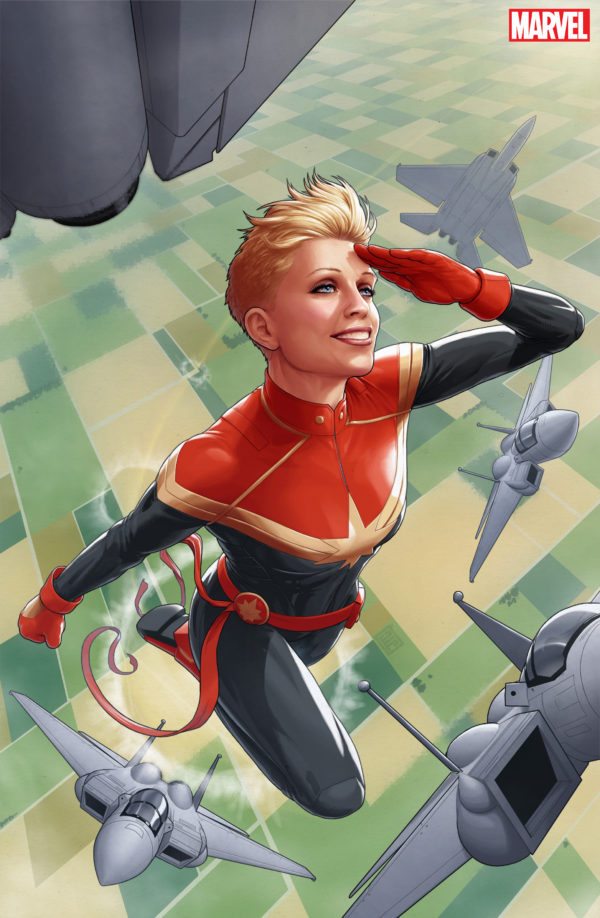 The first cover used was the Action Figure cover of Jubilee for X-Men ’92 #1. It was a series of covers meant to look like the old 90’s X-Men action figures. We also did Iceman, young Jean Grey & Emma Frost. I traditionally paint my covers, but I was able to draw the “package art” in the style of old 90’s comics. It was a blast from the past, and gave me a chance to draw like I did back in school. Since then, I’ve been asked to start doing other covers in that style, so it’s given me a whole new dimension to play with in my art.

I mentioned earlier, that as a 90’s kid, the X-Men and Jubilee are where my love of comics began. So to be able to work on her, and then see her in the game was mind blowing! The moment I saw her, I hit up social media and told my Alliance (daily 2k iso-8). I really nerded out!

The Captain Marvel cover was part of a series showing off Carol throughout her life. I had the idea for that cover, back when she was rocking the Ms. Marvel one-piece. When they asked me to do the cover, I knew I had to pull it out. I wanted to capture the joy of being Carol Danvers.

That Carol was the last 4-star character I used before I started running 5-star. She is one of my highest ranked 4-stars, and I LOVED to team her with 4-star Wasp.

Do you have any suggestions for future comic covers that you have worked on that you personally would love to see in MPQ?

I would be honored to see any of my work in the game. Because of the Action Figure covers, I’ve had the pleasure of drawing a huge chunk of the MARVEL universe, but there are a few characters which have eluded me. Maybe I can convince MARVEL to let me do a classic Dazzler, you know “for the game” wink, wink 😉

Where is the best place to find your work and are you working on anything cool that you can share at the moment with MARVEL?

I’m currently doing the covers for Old Man Quill, and more variants than you can shake a stick at (disclaimer, I do not endorse stick shaking). The MARVEL & Star Wars Action Figure covers are still going strong, and there is a series I’m about to start that I’ve been excited to do since we started them. I’ve also got a new wave of Spider-Man MARVEL Legends, that should be hitting store shelves in late June, that include Hydro Man and Scorpion!

Thanks so much for chatting with us today! Before we go, is there anything you want to say to the rest of the MPQ community?

Thank you for letting me chat and for allowing me to be part of such a great game; and for anyone out there reading this, please go easy on me when you see me in VERSUS 😉