THE JOURNEY TO COLLECT EVERY MARVEL PUZZLE QUEST COMIC COVER 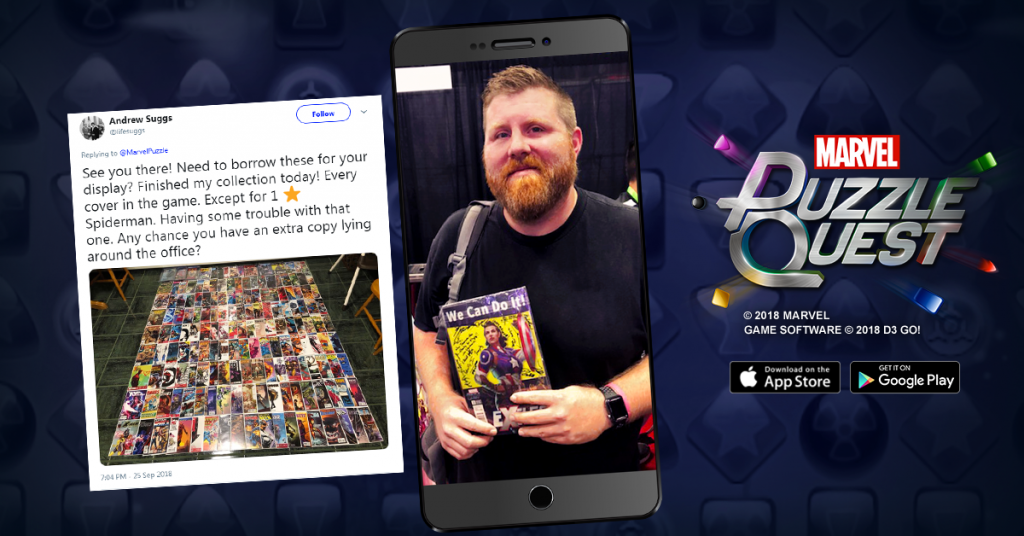 And in case you were wondering, which comic book is missing, well it’s Spider-Man’s debut: Amazing Fantasy #15…and that may take a little extra work to find.

(Andrew) I grew up north of Boston, collecting comics and playing sports. Moved to NYC for college and stayed working in the music industry. After that moved down to Tampa to start up a pro soccer team before moving in to the entertainment industry working with comedians. Most recently moved back up to the Boston area to help with some family stuff. Had some free time, which is when I found MPQ (Marvel Puzzle Quest) and started collecting books again.

How did you get into comic books and how has that passion fueled your interests today?

When I was younger I was always drawing and loved art. Was always playing sports, and my dad was a collector of many things so he got us collecting baseball cards. When he figured out I didn’t like organizing them in to boxes and preferred doodling, he brought me up to my local card and comics shop and had me pull a few comics out to see if I liked them. Read a Punisher comic and never turned back.

What prompted you to collect all the comics featured in Marvel Puzzle Quest?  Did you start with a bunch of them already or did you start from scratch?

I started playing the game looking for a time waster, came across MPQ and loved the art. Thought it was so cool how the team used the real covers to level up. I had just started collecting again after years of moving around so I was grabbing books here and there. My local comic shop held a show and had a bunch of boxes of $10 variants for $1 and I started digging through. I found four or five covers from the game and grabbed them because I liked them. Started to wonder if I could find them all, so I came home and went through my boxes and found about four or five more. After that, it became a fun side project.

Any cool stories on the collecting adventure that you can share?

I am all over the place with my current job, so it gave me a chance to pop in to local shops dig through some boxes and chat. When I would tell people about the game and what I was doing, it always got a fun response and some odd looks. The list of covers are all over the place, and some are incredibly difficult to find, variants, low print run one shots, 2nd printing variants, old keys, made for great hunting. I became a regular at no less than five local comic shops, and spent a lot of time hitting up used book stores, thrift shops, comic shows and cons. I joined numerous Facebook groups and apps and started making crazy deals and trades through those all the way to eBay.  With the list of covers so all over the place, everyone usually had some fun story about one of the books, or a good time telling me why I would never find a certain cover.  Wolverine X-Force, Black Widow Modern and Ghost Rider Robbie Reyes probably being the most difficult.

Some of my favorite finds were accidental ones. Towards the beginning I found three covers at thrift store that only had about 20 comics. That happened early and I think that’s what got me thinking “Yeah this collection should be easy!” turns out it was not.

If you can suggest one comic book (which of course means character) to add to Marvel Puzzle Quest, which comic would that be?

The one I submit every time you guys do a survey. Sleepwalker! He was my absolute favorite book when I was growing up. I still have the full run, and he just came back in the new Infinity Wars stories, so I am hoping he sticks. I’d also like to see some fun characters like Black Cat, Mr. Sinister, Red Skull or Honey Badger pop up.

So we assume you play some Marvel Puzzle Quest every now and then…can you tell us any of your favorite moments from the game?

I got 2900 HP off an anniversary token the other day, that was pretty baller.

I think one of the fun random things that’s happened from this game was when you introduced the whole Alliance thing. After I was booted out of many, many, many Alliances since I was new, I finally got one that allowed me to stay. After a while, a couple team events, and some wise *** sarcastic comments with each other to get us talking, actually have become Facebook friends with a few. Nice to connect with some like-minded folks and occasionally geek out over some comic stuff.

Thanks for sharing your story with us Andrew, it’s really cool to see how you built your collection!

Thanks, it has been a lot of fun. It was a pretty difficult collection to put together, you guys picked some great covers. It has been a bit funny to have the collection done though and trying to figure out what to collect next. I’ve already picked up the Cable book (thanks for not using New Mutants 87) and working on Taskmaster. With any luck I’ll find that random yard sale in the middle of nowhere and find an AF15 and finish off the collection.