Hidden princess and daughter of Super Villains, Karolina Dean has never had a normal life. This solar powered Majesdanian is the newest 4-star character to come to Marvel Puzzle Quest! Learn more about Karolina Dean (Runaways) in the latest new character developer blog! 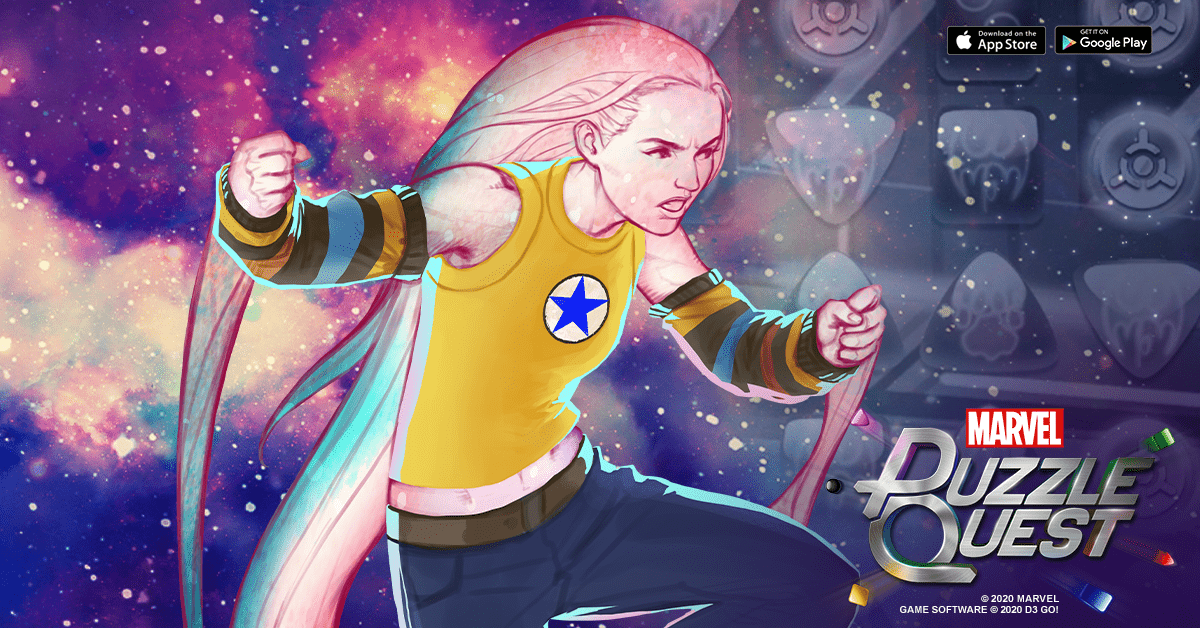 Coming back down to Earth after the release of the galactic Beta Ray Bill, Marvel Puzzle Quest gains another powerful member of the Runaways. Fiercely protective of her friends, Karolina brings not only strong protective powers but also the might of the sun itself to her battles.

In comics, Karolina is a team player and we tried to capture that in the game. Karolina’s fighting style often involves coming up from behind and then filling up the room, and taking advantage of the enemy underestimating her. Mechanically, this is represented by defending her team and healing them. Once she has protected her team, she flips the script and attacks them with an extra oomph helped by the Strike tiles.

Her powers tend to be a bit indiscriminate, although she has been learning to control them better. Representing this is her Green power, Solar Flare which affects everything, hitting the entire enemy team and healing all her allies instead of simply focusing the power.

Karolina is designed to play especially well with Nico Minoru due to their connection in the comics. The first reason we did this is that they are both part of the tight-knit Runaways team. However, they share a more personal relationship with each other. The two have always had a complicated relationship, and I won’t spoil anything, but the two continue to get closer throughout the past and present Runaways comics (and TV show!).

Karolina Dean is a great character to have been able to bring into the game. Some players may recognize her from the currently running TV show, but some will also know that the Runaways are a team that have been around in comics for a while now. It was fun to bring in a normal teenage girl from California. Except… that she is also an alien space princess that glows and shoots beams of light at her enemies. Oh, and she can fly? Bringing this to life in the game was an interesting challenge as opposed to working out the powers of a powerhouse like Juggernaut.

Karolina is the first character to be made to look like pure energy. Due to continual efforts by the engineering team over the years, we were able to apply a few technical tricks to make her stand out even more. For example, we had added the ability to manipulate the opacity and add additional rendering to make characters and other objects in the game stand out. When this is combined with Karolina, she really shines.

We really hope you enjoy her release in Marvel Puzzle Quest and we look forward to everyone’s feedback.  To learn more about her powers, please visit our FAQ HERE for more details.