An A.I.M. creation that has gained a life of his own,  M.O.D.O.K. is the newest 4-star character to come to Marvel Puzzle Quest! Learn more about M.O.D.O.K. (A.I.M. Overlord) in the latest new character developer blog! 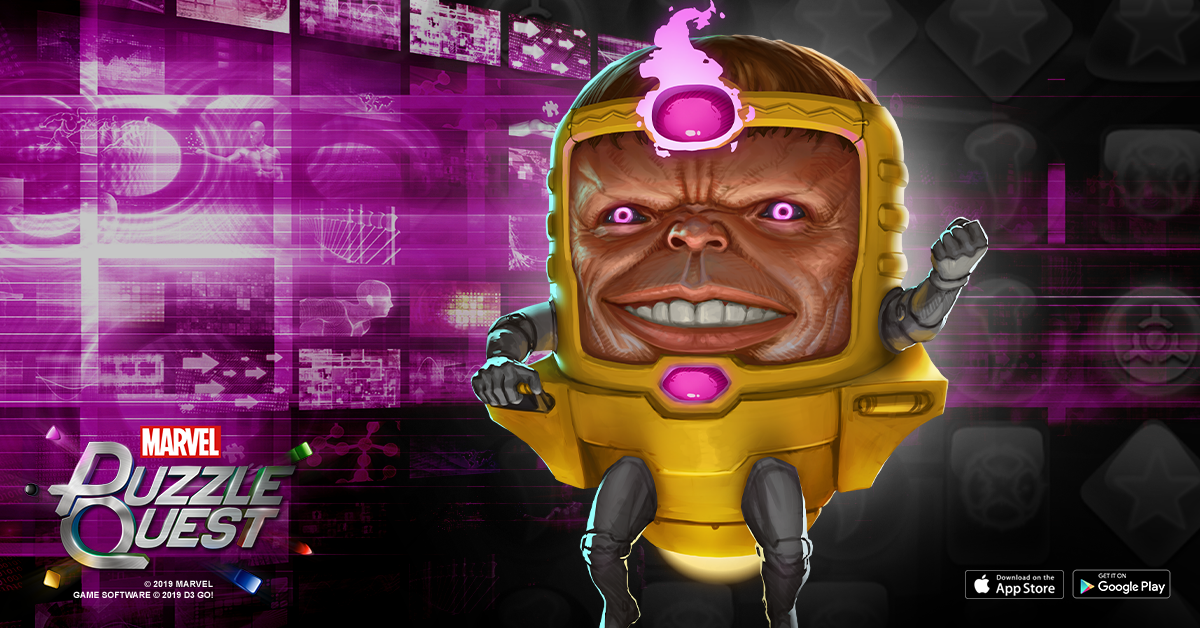 Gameplay-wise, M.O.D.O.K. brings massive amounts of firepower to the board, as well as a strong ability to power up Red powers, even if sometimes at the cost of his so-called teammates. M.O.D.O.K.’s got a ridiculous quiver of Red abilities. He has an impressive arsenal of weaponry and isn’t afraid of utilizing them against his enemy. Each time one is used in combat, he switches to his next weapon, culminating in a brute force Laser that annihilates anything it hits. Meanwhile, his Doomsday Plan can cause a great amount of damage, if only he can bring his plans to fruition. This ability works best with other characters with fast ability kits, making for some great synergy between characters.

The VFX for these abilities are also great, with his Red abilities really bringing out his glee in destruction, while his Blue Doomsday Plan feels like he is really planning some next level 4D Chess to defeat his opponents. Players that enjoy watching the various heroes strut their stuff in the game will definitely enjoy what M.O.D.O.K. brings to the visual table.

Speaking of art and visuals, most beings aren’t gigantic heads in a hi-tech chair. M.O.D.O.K.’s unique body shape has been real tricky to get into game… visually. He is always peeking above a health bar or is just hanging out in the middle of the informational text. Trying to fit Modok’s head (and thus, body) into the frame of the game was a challenge. With one whole unit as his body, scaling down wasn’t really an option, so instead we embraced it, making his pose one that makes sense to be staring over a UI bar.

This version of M.O.D.O.K., much like our last release, Wolfsbane, is an amalgam of various appearances of the scheming operator throughout the years. Thus, he brings not only he calculating mind of his earlier iterations through Doomsday Plan, but also his active mobility in Afterburner and a growing Arsenal of directly effective munitions with his Red abilities. M.O.D.O.K. is a being created for one thing, and he’s very good at it, but he’s grown beyond that. The version present in Marvel Puzzle Quest represents this latter portion of him, bringing fore everything that makes M.O.D.O.K. one of the most feared opponents to face off against.

We really hope you enjoy his release in Marvel Puzzle Quest and we look forward to everyone’s feedback.  To learn more about his powers, please visit our FAQ HERE for more details.