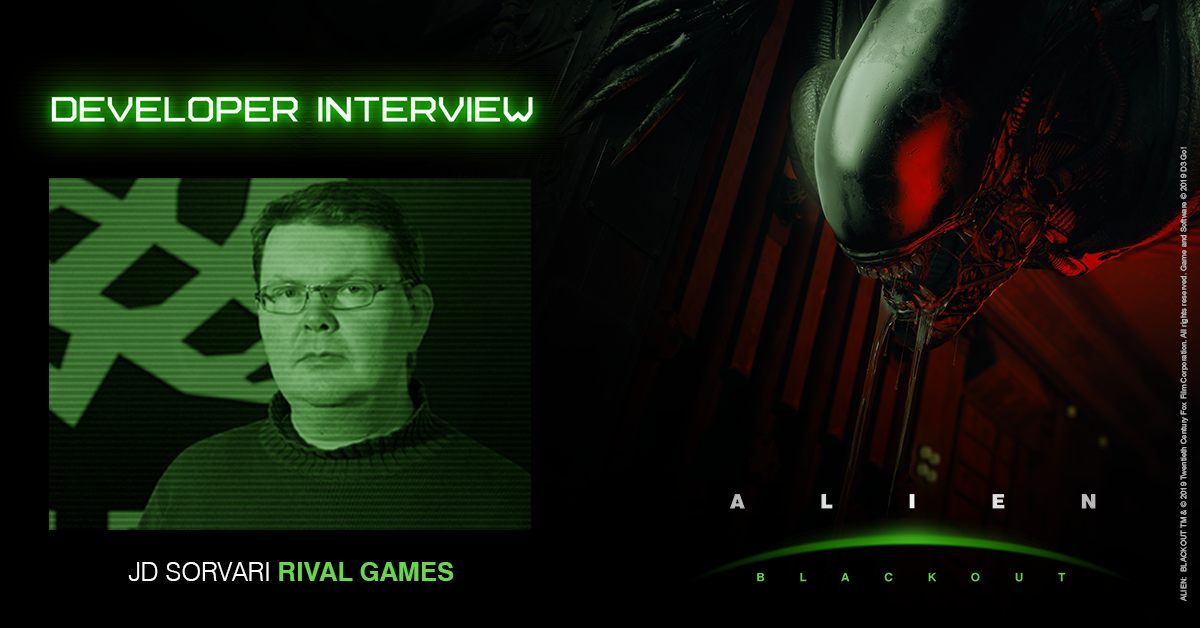 Hi, I’m JD Sorvari, Lead Writer at Rival Games.  With the launch of Alien: Blackout tomorrow on your favorite mobile device, I’m here to share some of the behind the scenes efforts it took to get the game launched!

I saw the first Alien movie when I was 10. This is probably not something I can recommend to anyone, but it did leave in me a lasting fascination with the franchise, along with the early realization that women can kick serious ass with the rest of them.

Some thirty years later, I found myself at Rival Games Ltd. developing a game set in that very same universe, featuring none other than the kick-ass daughter of Ellen Ripley, Amanda. For this one, we teamed up with Theory Interactive because, aside from their technical wizardry, they shared our love for Alien. Also like us, they wanted to not only honor the franchise, but to show that premium experiences can exist on mobile too. No in-app-purchases, just an exciting premium package that you pay for once and then enjoy for as long as you like.

Personally, I think that together, we succeeded.

Alien: Blackout continues the saga of Amanda Ripley, but it’s a completely different beast from Alien: Isolation. Everyone here loves what Creative Assembly did with that game, and wants more, but we never considered making an actual sequel to it ourselves. We may be ambitious, but we’re not crazy, okay?

Or the way our Creative Director Ina Vuorisalo puts it: “This is not the Isolation 2 we’ve all been waiting for. (Hah, I wish!) This is our own little love letter and tribute to the original film, Alien: Isolation and H.R. Giger, created by a small team of passionate developers here in Finland.”

Now don’t get us wrong. Just like Isolation, Blackout is meant to scare your socks off, but instead of wandering around the corridors by herself, Amanda now has to command a crew of four in an attempt to escape the Mendel station and its lethal occupant. This game still makes some of our own people jump, even though they know it inside and out, so consider yourselves warned.

So how did we end up here? Obviously, we first had to come up with a fresh game idea, as well as a story, and then convince FOX to let us play with their IP. We couldn’t have done it without D3 Go! who were our publisher for Blackout, and brought us together with the right people.

Let me tell you, while the game is scary, it isn’t half as scary as having a dozen FOX executives around a table, waiting for you to pitch an idea to them, so all the support we got from D3 Go! was greatly appreciated. To be fair, those execs turned out to be pretty cool once we got past our initial jitters. Also, working with the FOX franchise department and being involved with the actual Alien canon through them was an amazing thrill in its own right.

Although we were very familiar with the visual language, we dived deep down into the original Alien film and took a huge amount of screenshots to get the proportions and details right in the environmental assets. Another huge reference and inspiration was of course Alien Isolation. From there on we built assets from ground up to ensure their suitability for mobile devices.

As for voice talent, D3 Go! also helped us to get most of that together, but it was FOX who provided the linchpin to make this a bonafide Alien experience. And for those wondering, yes, that is Andrea Deck in the game, the one and only Amanda Ripley, reprising her role from Alien: Isolation. It was a fantastic day for everyone involved when we received confirmation that she had signed on for Alien: Blackout.

Sure, we had some tough days too. For one, we had promised to deliver a premium product, and FOX wasn’t about to let us publish anything less, so rough spots were first sanded, then sandblasted, and finally nuked from orbit to be built again from scratch. I am not a fan of the whole “pressure makes diamonds” thing, but I can’t deny that in this case, it resulted in the most together title we’ve made so far.

2019 is going to be a great year for Alien. Cold Iron Studios is working on their PC and console shooter, and there will be new books and comics as well! Being a part of this is a thrill and an honor for me, and something that my 10 year old self could never have predicted while cowering behind a pillow from the perfect organism that is the Xenomorph.

We hope you enjoy the game!