She might be a rookie in the comic book world, but over the past year and a half, Kamala Khan— aka the new Ms. Marvel — has very rapidly become a favorite for all kinds of readers. Now she’s destined to become a favorite for gamers, too: MTV News is excited to exclusively reveal that Kamala will soon be featured in “Marvel Puzzle Quest,” Marvel’s free-to-play match-3 adventure game.

Kamala Khan was first announced as a new character in November 2013, and has only led her own solo comic book series since February of last year — but you wouldn’t know how recent an addition she is to the Marvel family from looking at her passionate and growing audience. Her very first issue is still an international bestseller according to Marvel, and she’s also been featured in team-ups with other fan favorites like Spider-Man and S.H.I.E.L.D. agent Phil Coulson. As we learned recently, she’s even going to become part of the new Avengers team in “Avengers Assemble,” along with the similarly-celebrated female Thor.

As a teenaged Pakistani girl from an immigrant Muslim family — the first Muslim superhero to lead a comic book series, as a matter of fact — Kamala’s also been widely lauded by fans and critics alike as a positive example of the diversity that’s possible in comics. But Kamala is also infinitely relatable as a fanfiction-writing high schooler just trying to find her own place in the world, which makes her all the more compelling to her fans.

Sana Amanat, who co-created Kamala along with writer G. Willow Wilson, told MTV News that she knew that the character would make a splash.

“I knew she was going to have a big reaction, that people would get excited about her. I didn’t realize it would become sort of this mini movement,” Amanat said. She is now the director of Content and Character Development at Marvel, and feels that her creation is sparking an important conversation about diversity and representation — one that she recently participated in herself during an episode of “The Nightly Show” with Larry Wilmore.

Since Kamala was first introduced, Amanat told us, “I think [the amount of] people being vocal about the influence of diversity and representation has increased tenfold. There’s a lot more excitement about it, there is a lot more support, and I think she is very much the flagbearer of the new wave of superheroes.” 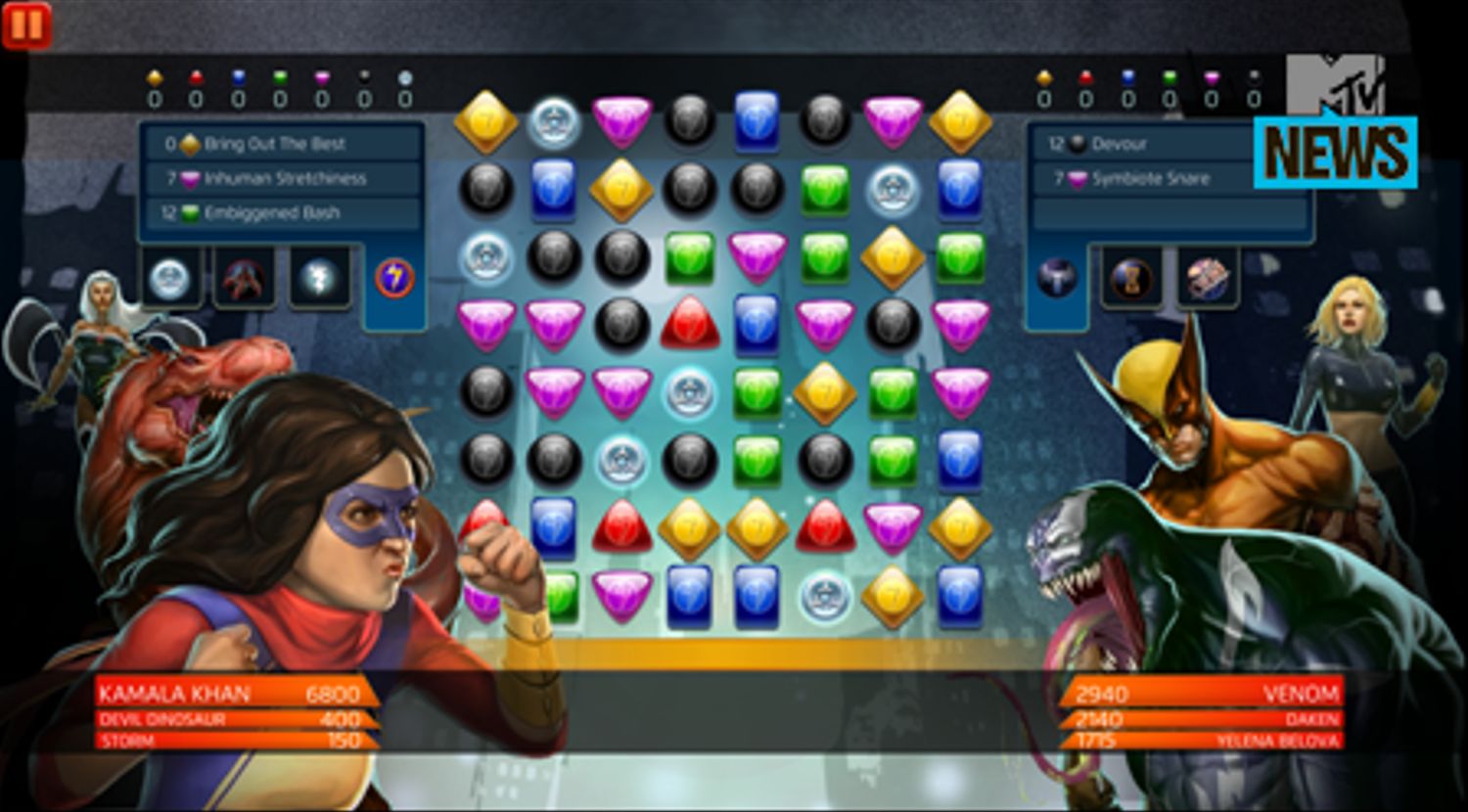 “I think she’s an incredible symbol of not only the women of Marvel but [of] Marvel period, and what it means to be a hero and where we are heading as a company,” Bill Rosemann, the Games Creative Director for Marvel, also told MTV News. “In many ways, she’s the little engine that could. People have been really flocking to her and championing her and identifying with her from all walks of life.”

Kamala’s induction into “Marvel Puzzle Quest” also comes right on the heels of the Women of Marvel celebration, an event that’s been running the entire length of March in honor of Women’s History Month. All of the variant covers sold in comic book stores this month weredrawn by women, and female characters in the franchise have been featured prominently across all of Marvel’s games.

“For us I think this is women finally feeling like they are being represented at Marvel in a very real way and in the comics industry in a very real way,” Amanat said of the positive feedback the Women of Marvel event has received from fans. “That’s really something we want to continue to cultivate, and this month in particular is a celebration of all of the work we’ve done and a promise of even more to come.” 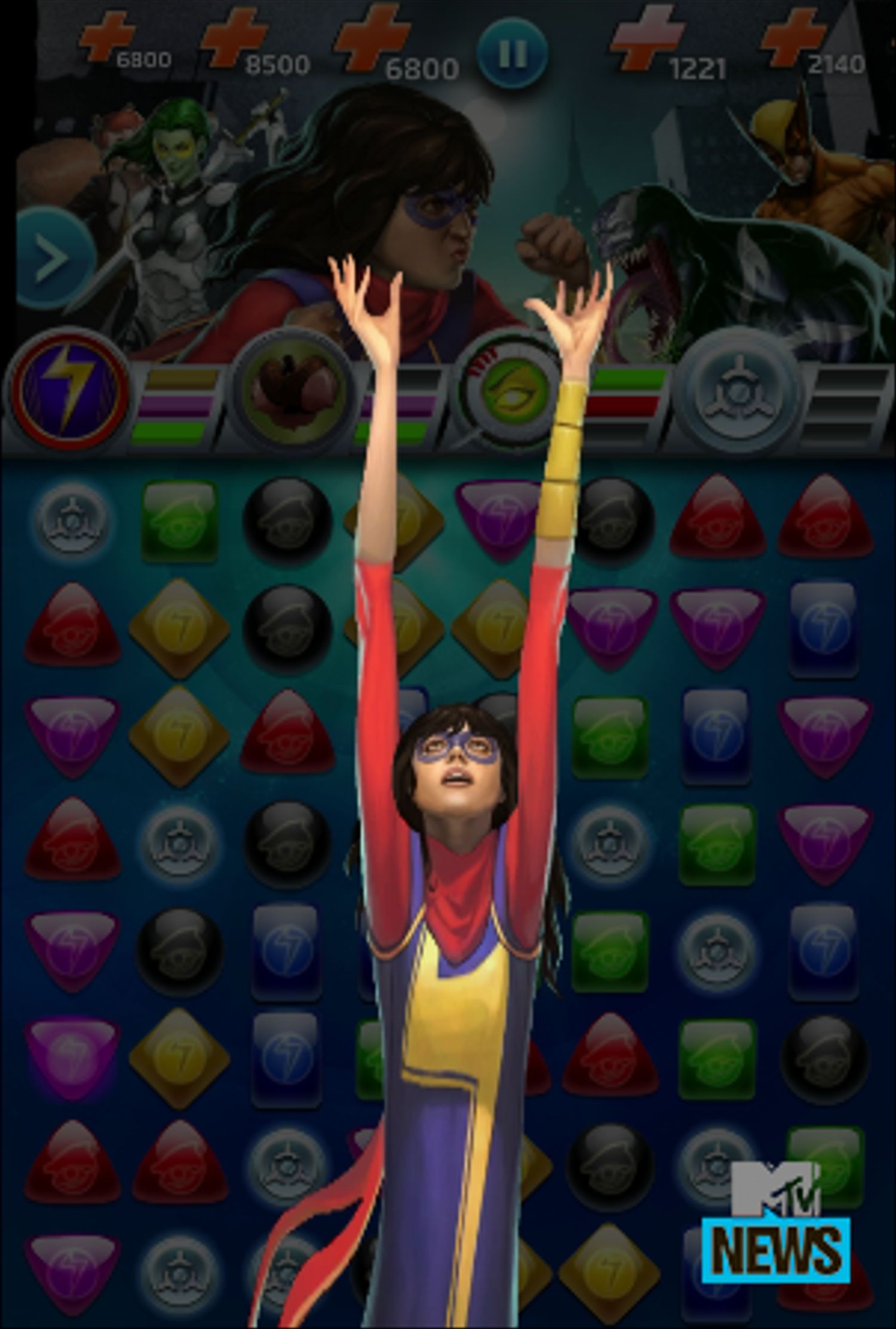 So what’s it like actually playing “Marvel Puzzle Quest” with Kamala Khan on your team? Pretty much how you’d expect it to be from reading the comics, developer Joe Fletcher of D3 told us.

“Whenever we make a character — and [Ms. Marvel] in particular — we kind of want to go in and research exactly what makes the character who they are,” Fletcher said. As a result, her stretchy, shape-changing powers will definitely show up in the game board in a big way (pun intended). So will her upbeat attitude and desire to help others, which will translate to bursts of energy and other power-ups for the other heroes in your line-up.

“She’s very unlike any other hero or villain that’s in the game,” Bill Rosemann added. “She’ll definitely have a moment to shine and show gamers why she has such international appeal.”

And for those of us who want Kamala get the change to kick *** in other games, Bill Rosemann has this to say: “If you’re happy about seeing Ms. Marvel here in ‘Marvel Puzzle Quest,’ stay tuned.”