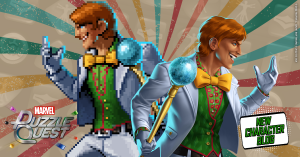 Deadly, yet dapper – how we designed one of Marvel’s most entertainingly devious villains.

For this year’s MARVEL Puzzle Quest anniversary, our art team wanted to celebrate this momentous occasion in style. Specifically, two styles! And what better way to do that than with one of Marvel’s most chaotic and entertaining villains, Arcade.

Featuring two distinctively maniacal designs for the Arcade (King of PWN) 3* and Arcade (Edward Acra) 5* variants, art Amber Ansdell (Director Amber) sat down with Heather Shwartz (Artist) to learn about the madness that went into designing such a unique character.

AA: Like with all characters we create for MARVEL Puzzle Quest, hours of research and reference materials are gathered. This research is vital as it gives us a fuller understanding of the subject’s stories. This is crucial information when understanding their fashion sense, visual feel, and personality. A sentiment both Heather and myself share: 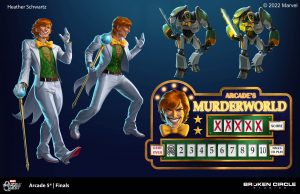 HS: The first step in our research is to truly understand what is the essence of Arcade as a character. In his case, he’s an eccentric but very intelligent hitman with a knack for creating deathtraps for heroes. With that in mind, I then looked at the various iterations of his style over the years. Having first appeared in 1978’s Marvel Team Up #65, his original design was very much a product of its time: a flashy, white, bell-bottom suit, matching red-starred platform boots, and completed with a large polka-dotted bow tie. These individual pieces were changed throughout the decades as fashion trends changed, but the formula stayed the same: white suit, bow tie, and flaming orange hair. For MPQ’s iteration, I wanted a design that was somewhat fashionable to modern times, but still had a little bit of the silliness (namely, large bow tie and funky patterning) inherent in his character – think circus ringleader or dapper clown vibes. 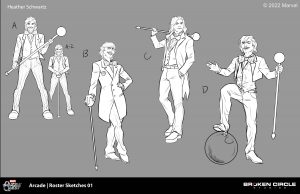 AA: After we pieced together Arcade’s modern, yet iconic style, we tackled his 3-star pixelated 80’s arcade cabinet version. Knowing full well that we had our work cut out for us, we felt that this creative direction was a perfect fit for the character so we stuck to our guns. 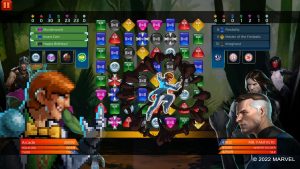 The main challenge of creating this pixelated character was a unique one: translating a fully rendered piece to a 16-bit pixel sprite. When you’ve got so few pixels to work with, inevitably some details need to be left out – the hard part is figuring out how to keep the integrity of the art without those details. For example, given that his face is such a small part of the entire piece, I had to learn how to suggest the idea of a face within a 20 x 20 pixel space. Turns out the trick is to make sure the expression reads as intended, and your eye will do the rest.

While a challenge, Arcade proved to be, internally, one of our favorite characters to work on because every aspect of the character sends a message that defines him. Whether it be his cunning grin, eccentric personality, or wild fashion sense, there’s something thoroughly satisfying about creating a character with this much pizazz and gravitas.

HS: I love that Arcade is, at the end of the day, a very flashy-looking hitman who happens to carry out his hits through the medium of excessively elaborate, often garishly-colored, deathtraps for heroes. He’s a quintessential evil genius, who loves to cook up complicated schemes just to sit back and watch it all unfold (and look fabulous while doing it).

Now that he is finally available to MPQ players, I hope that the fans can tell how much fun I had creating the art for Arcade’s two visual identities. He’s a character that you can’t take seriously, but you have to take seriously, satisfactorily cool suave, but disarms your guard with a healthy dose of ridiculousness that makes Arcade, Arcade. The vintage pinball/video game vibes are strong with this one, and I hope his release adds this little bit of arcade game magic and nostalgia to MPQ!