The big 1.5 ‘Oath of the Gatewatch’ update goes live today for Magic: The Gathering – Puzzle Quest and you can find the voluminous patch notes below. We think you’re going to have a lot of fun with this one – so, get to reading and downloading! 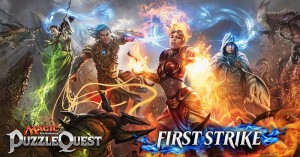 The v1.5 update includes –
– Introducing the Oath of the Gatewatch cards with first lot of cards now available!

– All cards from Battle for Zendikar can now be looted.

– Many additional improvements and bug fixes.

– Fight 16 new encounters created with cards from Oath of the Gatewatch.

– Each week, defeat Chapter 2 of the Event to win a limited-time exclusive Rare or Mythic card.

– The Oath of the Gatewatch Event will run each week for 3 days, after which time the Event will reset and new rewards will be available.

Cards from Oath of the Gatewatch are of rarity from Uncommon and up.

There are multiple ways to get cards from this set:

– Loot them in Battle for Zendikar Boosters and Free Boosters.

– Earn them in the Oath of the Gatewatch event as rewards.

– Buy a Battle for Zendikar Fat Pack and gain a guaranteed extra Oath of the Gatewatch card.

Each Oath of the Gatewatch Booster contains 5 cards from the set, and has a guaranteed Rare in every Booster.

Koth of the Hammer:

– Reshape the Land is now Koth’s first ability and costs 6 (down from 15) Loyalty at every rank.

o Koth needs to be able to generate Red matches much more than other Planeswalkers, so this ability is key for him. At 6 Loyalty, he is able to use it much more often.

– Rage of the Mountain also now gives Trample to each of your creatures until the end of your turn.

o Rage of the Mountain has been buffed so it is more in line with its new cost and position as a 2nd ability.

– Strength of the Mountain now costs 20 Loyalty, down from 30.

o Strength of the Mountain cost too much and was severely underused as an ability, and so it has been changed to be more usable.

o The design intent behind Koth initially was that we wanted him to have a huge Red focus to the detriment of all the other colors. This didn’t pan out as we expected – he ended up being too weak and was only playable with low-cost decks. With this change, he gains more mana per turn overall, and his Red focus has been enhanced. We love the idea of having a Planeswalker where mana considerations are different, but he wasn’t strong enough initially.

o Sundering Slash is very strong used in tandem with White’s Disabled removal, and this proved to be too strong. At 6 Loyalty at max rank, it is still very usable but cannot be spammed.

– Lightning Helix now costs 12 Loyalty (up from 9) at all ranks.

o Lightning Helix is incredibly powerful direct creature removal and healing. At 9 Loyalty, it was proving to be too strong, and had to be dialed back a bit.

– Overall, Ajani is still very powerful, but his first 2 abilities will require a bit better timing to use properly.

Animist’s Awakening
Animist’s Awakening is proving to be a problem in the long term, as it limits design space and makes Green Planeswalkers have too much very fast mana gain with very little investment. That said, Green is still the master of gem conversion and will keep getting gem conversion spells and abilities.
o Now costs 5 mana (down from 10).
o Now converts 5 gems to Green (down from 10), on cast when 8 or more Green gems are on the board.
o Now converts 5 gems to Green (down from 10), when the Activated gem is matched or expires.

Avaricious Dragon
o Now costs 15 (down from 18).
o Now Destroys 3 gems from your opponent’s color whenever you draw a card (changed from giving the drawn card 3 mana) .
o Gem destruction is much more in-line with Red than straight mana gain, and this feels much better. The cost has also been adjusted to fit with its new stat line.

Chandra’s Ignition
o Now costs 14 (down from 19).
o Chandra’s Ignition was overcosted, especially considering other damage sources that deal similar damage for a similar cost. It now has the same cost as Serpentine Spike, but trades higher potential damage with automatic targeting.

Day’s Undoing
o Now costs 10 mana (up from 6).
o Day’s Undoing is a very strong Mythic card for Blue, and with its previous cost you would end up with 9 extra mana. At 10 cost, this is reduced to a more reasonable 5.

Evolutionary Leap
o Now costs 15 mana (down from 21).
o Now spawns 2 activated gems (up from 1).
o Evolutionary Leap was lacking in power as it was both very difficult to activate and cost too much. At 15 mana, it is much more reasonable, and also with 2 Activated gems will provide you many more opportunities to match.

Gaea’s Revenge
o Now has 16 Power (up from 9).
o Now has 9 Toughness (up from 6).
o Gaea’s Revenge was overcosted for what it did. We like the idea of Green having large, powerful creatures, so we left the cost at the same value – but its power and toughness have greatly increased. It should now be much more desirable to play.

Hixus, Prison Warden
o Now costs 6 mana (down from 15).
o Hixus, Prison Warden is incredibly powerful. Raising its shield value is a difficult proposition because even at 2 it is too strong – should it spawn in an unreachable location, it becomes impossible to win. At 6 mana, however, it is now cheap enough that it should be usable and worth the mana, as it will be easily reinforced yet still remain destructible.

Infinite Obliteration
o Now costs 6 (down from 12).
o Now Discards the first and last cards in your opponent’s hand (changed from Creatures only).
o Infinite Obliteration cost too much and was too situational. With this new cost and text, it should be much more valuable.

Molten Vortex
o Now costs 10 (down from 21).
o Molten Vortex was severely overcosted – its new cost is much more in line with the new direction.

Skaab Goliath
oThis creature has been fully redesigned.
o Its Power is now 1.
o Its Toughness is now 3.
o Its card text now reads “When this creature enters the battlefield, destroy each other creature you control. This creature gains +6/+6 for each creature destroyed this way.”
o Skaab Goliath’s initial design was not successful. With this redesign it still has the intended effect (it’s essentially a giant zombie that is built through other creatures) but it is much more workable than it used to be. The +6/+6 also ensures that you will most likely get value out of it, instead of just plainly losing a lot of mana’s worth of creatures.

Tragic Arrogance
o Now costs 10 (down from 18).
o Tragic Arrogance was overcosted and this puts it more in line with the power level of Mythic cards.

Woodland Bellower
o Now costs 16 (down from 20).
o The card was overcosted and this puts it more in line with the power level of Mythic cards.

Abbot of Keral Keep
o Now costs 13 (down from 15).
o Removed mana gain on the Fetched card.
o Now destroys a 5×5 block of gems (up from 3×3).
o Straight Mana Gain doesn’t fit with the Red theme, and thus was reworked into extra gem destruction. We adjusted its mana cost to compensate.

Dark Petition
o Fixed a bug where Dark Petition could not be cast when the player already has 3 Creatures on the battlefield.

Relic Seeker
o Now costs 15 (up from 12).
o Relic Seeker was undercosted for its power. It has been readjusted.

Shadows of the Past
o Now costs 12 (down from 14).
o Now Traps 4 gems (up from 2).
o Shadows of the Past was underwhelming, as you could often go an entire game without its ability activating. With 4 Trap gems, it should activate much more.

Eldrazi Scions
o When an Eldrazi Scion dies, it now grants mana to its controller (equal to its power times 3).
o This change should make Eldrazi Scions much more interesting as they are a great mana source for each and every color.

Crumble to Dust
o Now costs 6 (down from 12).
o Crumble to Dust’s main utility is to do a massive Ingest against Blue or White enemies, but its cost was too high.

Oblivion Sower
o Now costs 14 (down from 22).
o Oblivion Sower cost too much for its effect, and had to be drastically reduced in casting cost.

Smothering Abomination
o Now costs 16 (down from 23).
o While an excellent card, it was too situational for its cost. At 16 mana, it should make for a much more efficient and annoying Creature for Black.

From Beyond
o Now costs 9 mana (down from 19).
o From Beyond was much too costly for what it did. It is now more in line with other Rares.

Noyan Dar, Roil Shaper
o Now costs 18 (up from 15).
o Noyan Dar is incredibly powerful in most Blue decks, and while we love the card, its mana cost had to be increased a bit to fit the power level of other cards.

Veteran Warleader
o Now costs 15 (up from 11).
o Veteran Warleader is incredibly powerful in Ally decks, and he was coming out too quickly. We increased his cost to make him a bit slower.

Roil Spout
o Now costs 10 (down from 14).
o Roil Spout cost too much and was improved.

Cost changes to Awaken
The Awaken ability that summons tokens has had its ability budget revised. As such, the following cards’ Awaken cost has been changed:

• Fixed display & SFX issues when Smothering Abomination is on the battlefield with Deathless Behemoth and Erebos’s Titan.
• Fixed multiple issues that occurred when Greenwarden of Murasa Returns a creature to the battlefield.
• Player no longer fails to draw cards from Support gems when making a Landfall match without a creature on the opponent’s battlefield.
• The opponent no longer targets its own creature when casting multiple spells.
• Deathless Behemoth no longer returns to the battlefield when destroyed while creatures with prevent damage are on the battlefield.
• The opponent no longer fails to Fetch another card when casting the Anticipate spell card.
• Fixed multiple cases where “Network Error” message erroneously displayed.
• The app should no longer become unresponsive when viewing the Vault.
• The Level Difference should not exceed 5 when searching for a match during a Quick Battle in the Quick Battle Menu.
• Fixed multiple text localization issues.
• Buttons are no longer unresponsive after selecting the Clear Deck button.
• The cards no longer fail to be added when using the Quick Improvement feature.

Additional Bug Fixes are also being addressed but are not listed here in the notes.