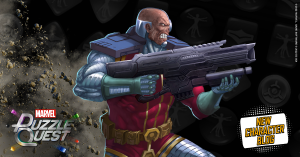 A lot goes into designing the slew of characters that go into your rosters in MARVEL Puzzle Quest. Not only are the visual designs of a new character important, but getting their abilities to look, feel, and act like they’re a part of that character’s DNA is equally as important. Today we sat down with Trevor Tomey (Design Director) and talked shop about how he took Deathlok through our development process to build this pacifist fan favorite and make him formidable in battle. 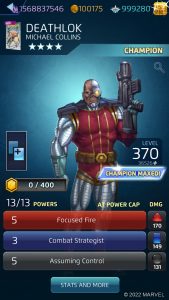 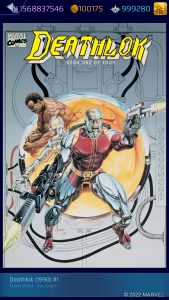 TM: Ever since I can remember, I always thought cyborgs were cool and when we got a chance to work on Deathlok, needless to say, we had a ton of fun working on putting our own unique spin on the man vs. machine trope.

Mechanically speaking, it’s easy to look at his powerset and just make another super-powered robot badass or emulate the iconic strength of the Hulk; and on the surface, a half-ton walking tank sure fits the bill! But Marvel characters are characters first and there are a few points that are really interesting about Michael Collins as Deathlok. Sure, he’s got an indiscriminate AI in his head, but Collins is the one in control; and he got his Ph.D. before the supercomputer upgrade, in service of the program he thought would help those with physical disabilities. 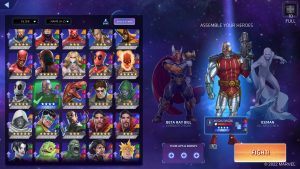 In MPQ, each color has a set of themes associated with it – for example, Green abilities tend to break lots of stuff at random, whereas Red tends to be direct & focused; Blue out-thinks you, and Black succeeds at all costs. Deathlok isn’t just a walking tank, he’s an extremely intelligent one – we wanted to express that in the character through his Focus Point system and how we treat the AI. With Deathlok we wanted to create a character that rewarded players for creating offensive team strategies that take down targets one at a time. Let’s take a look at how this is achieved.

Deathlok’s Red passive – Focused Fire – rewards you for picking a target and focusing on them – continually making Blue & Red matches against the same target, and they’ll take more and more damage from your team’s matches & abilities. Make sure not to switch targets if you want to keep that damage up or if you’re playing against an opposing Deathlok and make sure to shuffle frequently to combat this stacking mechanic! 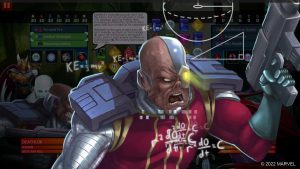 Next, his Blue ability – Combat Strategist – is about expressing how his AI-augmented genius gives him tactical mastery over the battle so tricks like invisibility and flight won’t work against him. We also saw a great opportunity to continue to expand and improve the Affiliations in MPQ here, with the addition of the Synthetic & Technologist tags to many characters – just in time for his AI to boost your team’s AP or practice a little electronic warfare against Ultron! 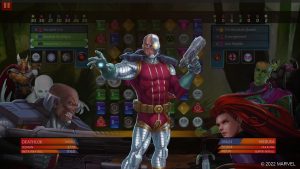 Finally, even though Collins has control, the Encephalonic AI is a big part of the character and a powerful last-resort tool at his disposal. Activating his Black ability – Assuming Control – turns Collins into that unstoppable, indiscriminate machine that Deathlok was built to be. He gains a minimum Focus Point count and deals damage based on those points every turn, great for ramping up damage immediately after switching targets; but the AI doesn’t care about anything other than getting the job done, so your teammates are just more targets for that damage – plan carefully for how you use it!

So, my tips for playing Deathlok: