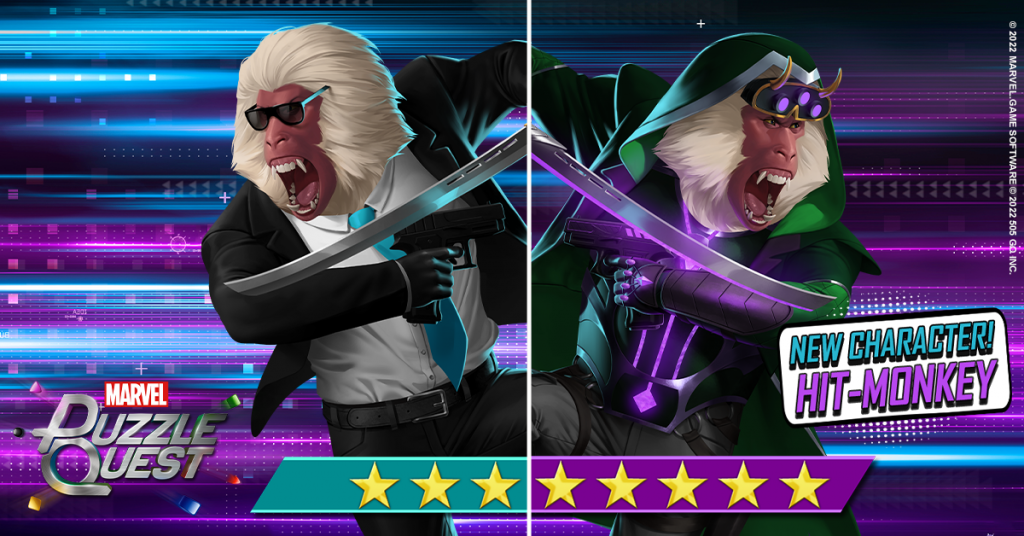 Whether it’s lacing up for a formal affair or strapping up your cyber-katana, there’s a monkey for the job. We sit down with Amber Ansdell (Art Director) and Heather Schwartz (Artist) to discuss how we took the entertainingly adorable concept of a monkey assassin and made him our own.

Amber: The holiday season is upon us, and with it swings in our newest release, Hit-Monkey! However, this isn’t the usual suit and tie affair; this December, Hit-Monkey has a whole new look and a stocking stuffed to the brim with new gadgets and toys.  We on the art team are proud to kick off this winter season with a new twist on a classic character! 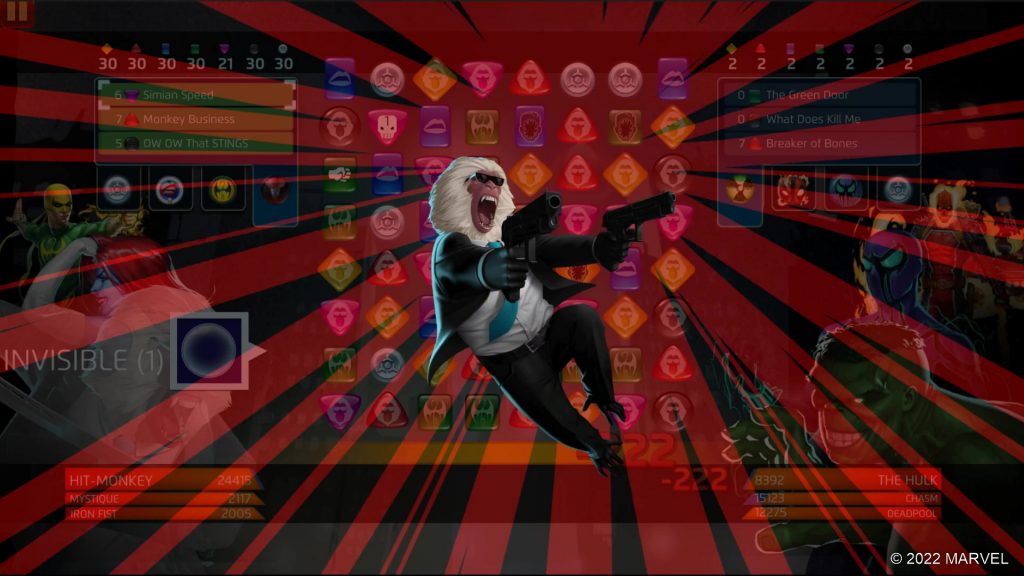 This hero, like many of the previous characters we’ve created, are based off of a previous IP. Many of the heroes we design are amalgamations of already created iterations of these characters. However, with Hit-Monkey, we were able to come up with our own story and give our hero a new look completely unique to Marvel Puzzle Quest. I worked with Heather Schwartz, our concept Illustrator, to create Hit-Monkey 5*. 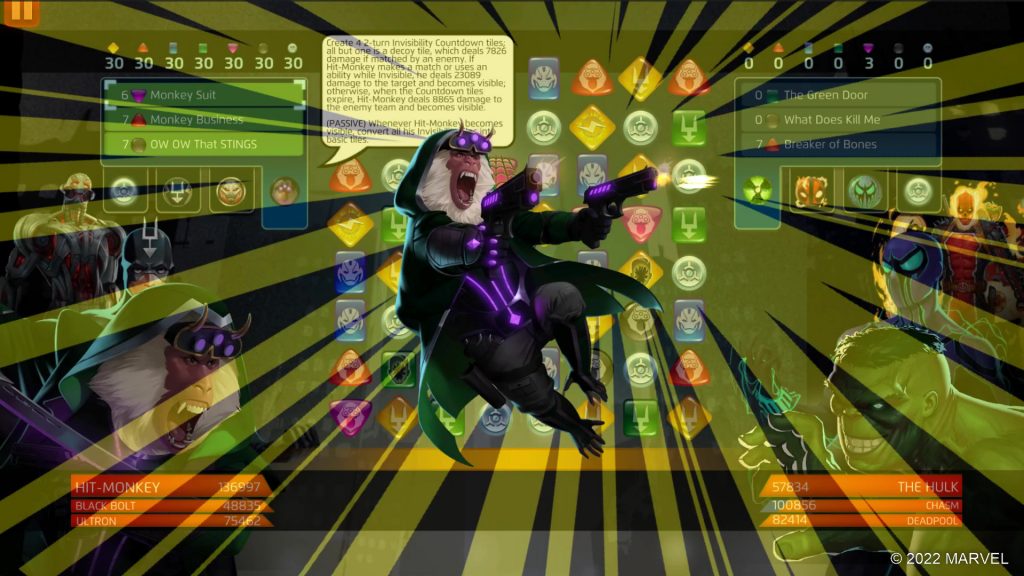 Heather: Normally with our MPQ characters we’re working off of an existing design, or making only minor changes, but with Hit-Monkey we were given the opportunity to create a design from scratch. While we did have some concrete ideas (i.e. that he would be decked out in an E.D.I. suit and cyber-katana, experimental Stark technology powered by Iso-8) we got to freely experiment with species, costume, and inspiration. There were monkeys a-plenty, from burly gorillas to knife-wielding, mustachioed capuchins, and several pages of suit ideas, drawing inspiration both from the original E.D.I suit and a bit of Loki flair. 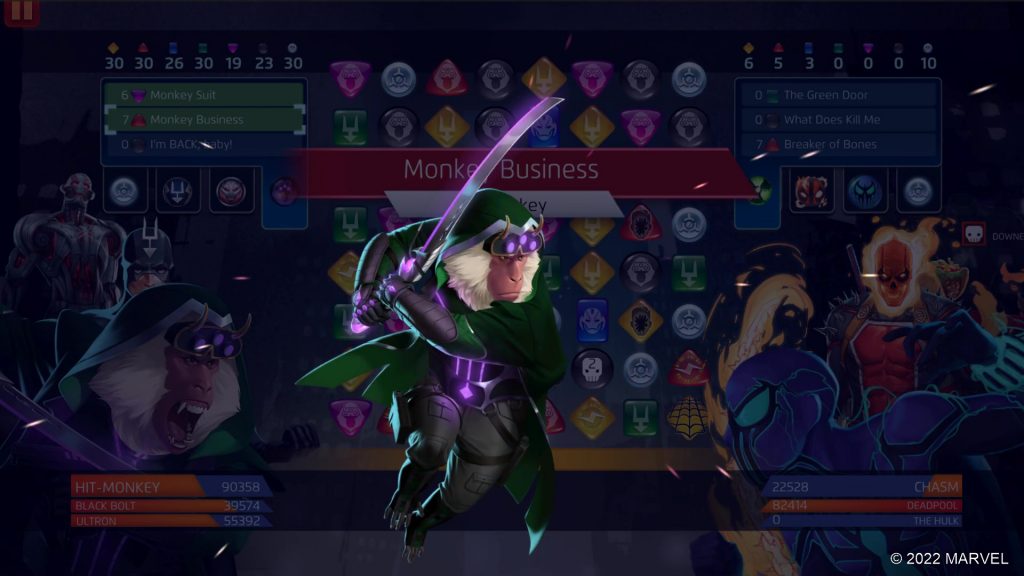 I had a blast playing around with various weapons, sets of armor, colors, and Iso-8 accents, trying to strike a balance between practical and fantastical. We eventually landed on a Japanese Macaque (staying true to the original) but costumed in a kid-Loki-inspired suit with an Iso-8 crystal front-and-center, complete with a set of horned night vision goggles, bejeweled gauntlets and gloves, and a grand, silver-accented green trench coat.

Heather: Even though 5* Hit-Monkey was a new creation, I started by researching the source material, including comic appearances. Knowing a character’s background is essential to depicting them accurately, but also for hitting the correct tone. Hit-Monkey in particular is somewhat dark, but also fully owns his ridiculousness. I needed both versions of Hit-Monkey to be kind of silly, but badass all the same (considering he is a master assassin, after all). 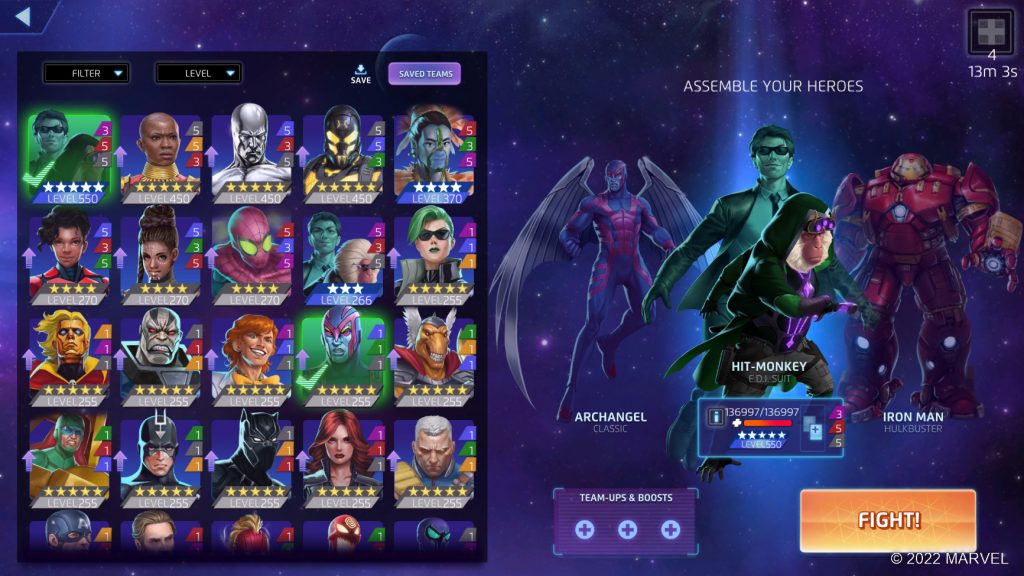 In the case of the 5* design, I wanted the suit to be a little over-the-top, but still sophisticated and cool-looking, given that it’s made of modified Stark Tech. I used metallic accents to contrast the dark colors and matte clothing, shot through with vibrant Iso-8 purple to honor the futuristic Stark look, along with a healthy dose of green, gold horns, and leather straps to honor the Loki look. 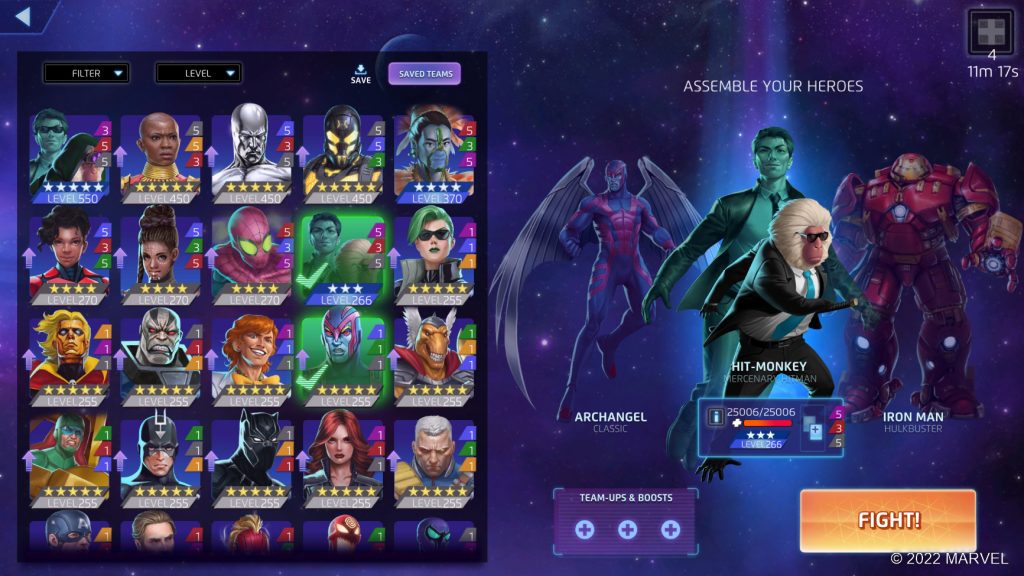 For the 3*, I kept things simple with a sleek black suit, tinted sunglasses, and no visible holsters (Is he armed? Is he not? Who knows!), for more of a classic, aloof, ‘hired mercenary’ vibe.

Amber: Hit-Monkey is a wonderfully absurd anti-hero, however, if you’re familiar with his source material, he’s a character with depth. I personally really enjoyed Heather’s work because, while this character is- by all titles, a monkey, I felt Heather really nailed the emotion and gave Hit-Monkey such a large array of expressions that really speaks to the emotional depth of the character. There’s a lot to love, but I think Heather put it best: 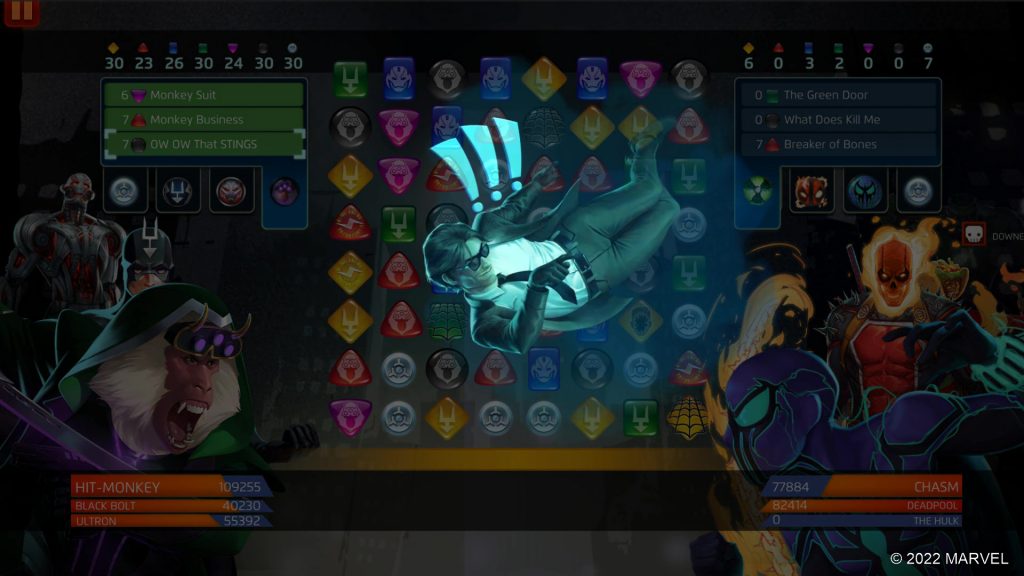 Heather: The idea of a highly skilled monkey assassin haunted by the unwilling ghost of his trainer is objectively incredible, also the fact that he’s also decked out in a suit and sunglasses. I love that Hit-Monkey is fully Just a Monkey, but still a legitimate threat.

I hope the fans will love the ridiculousness-taken-seriously of it all, and enjoy the fantasy of playing as a technologically enhanced monkey assassin as much as I enjoyed creating him.