While the 9th Anniversary Bash of MARVEL Puzzle Quest concluded in October, the party won’t stop as we go into November with our latest five-star addition to the roster, Riri Williams (Ironheart 3.0)! Buckle up and enjoy this latest blog as Amber Ansdell (Art Director) discusses how we helped this iconic character take flight once again. 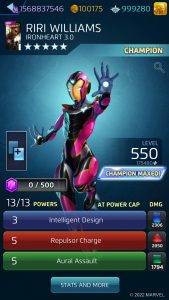 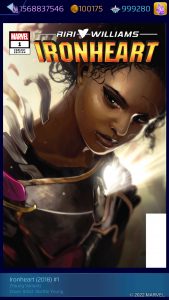 AA: Riri Williams (Ironheart 3.0), flying in with brand-new armor and a whole lot of fire power, is our latest character to get the five star treatment! We on the art team were tasked with illustrating Riri’s latest look, which was no small feat, but an incredible opportunity to show off Riri’s latest moves. 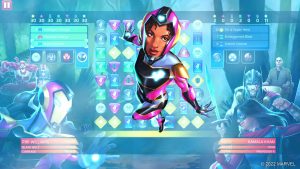 I worked with Katie Friese, our character concept illustrator on Riri Williams. As part of the art pipeline, we try to work in time to do studies, research, and fact gathering before hitting the ground running on our heroes. As Katie states, Riri Williams was no exception.

KF: The first step in starting any character is to go and find out who this character is, what makes them tick, how many versions of that character exist, after which we decide which ones we’re aiming to portray. Once we hone in on what character and design we want, I usually do a deep dive into that hero. 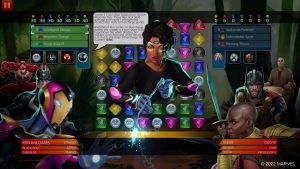 For Riri, her armor is a huge part of her character, and I wanted to make sure I understood the design front to back. I went through all of Riri Williams’ appearances in comics and took screenshots of Riri and her suit in many different poses.  There’s some stylistic variance that happens within the comics, so I do my best to blend all of those into the design that ends up in-game. As the design process progresses, I nab any new reference that I need for new poses. For Riri, I pulled some designs of welders for one of her abilities and added them to my ever-growing reference board. 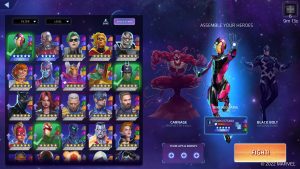 AA: With a character of this caliber there are always challenges, especially in terms of digital painting. We try to do right by the materials and rendering with precedent set by the comics, and as Katie explains, it never hurts to hit the books.

KF: Metal suits were a new challenge for me; rendering that much metal was definitely something I struggled to wrap my head around for quite some time. I had to pull art books off my shelf to draw additional inspirations and techniques from. You never stop learning as an artist; fundamentals are always important to revisit and sometimes even relearn! 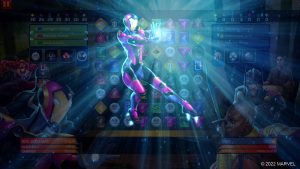 AA: There’s a lot to love about this character. The developers on the design side really gave us a lot of great material to work with and I’m proud of the results. I’m especially happy about how much of Riri’s personality got to shine through, a feeling both myself and Katie share.

KF: Riri’s resilience and determination to find answers and pursue her goals is a really admirable trait. Being a Super Hero is already quite an admirable vocation, but it’s even more impressive when juggling that on top of being a teenager! From an artistic standpoint I love the overall design of Riri as a character; she’s both soft and badass at the same time!