We’ve come here today to announce a brand new Event Type: the Duel Decks. In this completely new Event type for both new and older players alike, you will pick a side and fight for its victory. Each Duel Decks is a mini-collection with a varying amount of new cards obtainable through gameplay and for the duration of the event in the Vault. 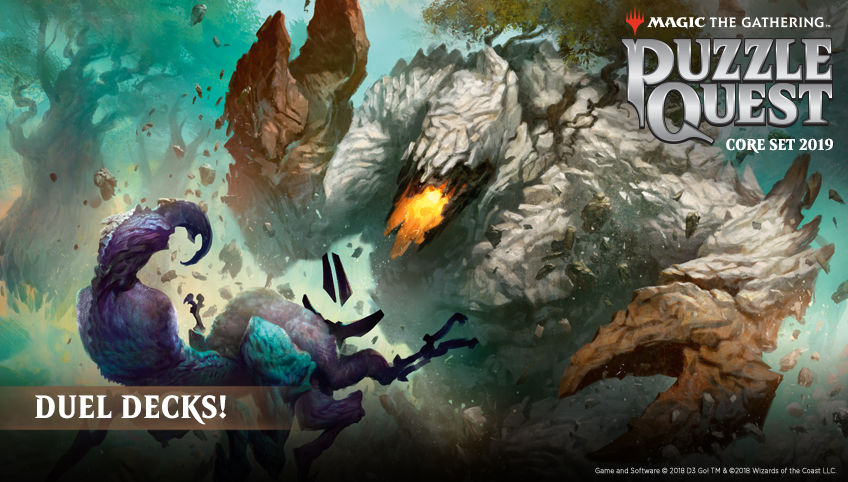 This Event type is divided into three Phases and is intended to last 2~3 days. Here are the Phases: the Challenge, the Duel and the Final Duel. It is also the first event that is both a mix of PvE and PvP.

The Challenge Phase is a PvE phase. It is intended as a way for newer players to participate equally in the event and experiment with both sides before committing to one. Here are the rules for this phase:

We want players, new and old, to have fun with the new cards. It also allow us to show players our own take on some older mechanics (in case of Duel Decks that relate to older collections like Zendikar).

The Duel and Final Duel Phase

The Duel and Final Duel Phases are PvP Phases. In these phases, you will choose and fight for a side against players that have chosen another. Here are the rules for these Phases:

We want veteran players helping and cooperating with newer players towards a common goal. That goal being…

The reward structure in this Event type is very simple. Players will earn their rewards while playing and completing objectives. Players will also earn rewards based on whether their side won or lost. To gain these rewards you must choose and play at least 1 match for the side you chose.

The winning side will always earn the Exclusive card for their side as well as an amount of each currency and a Duel Deck Booster Pack.

The losing side will always earn some amount of each currency and a Duel Deck Booster Pack.

We also wanted players to enjoy flashy new content after the event is no longer running. Because of that, Duel Deck events are actually really small collections. Collections that have 4 different Booster Packs and 1 or more PWs that are available for the duration of the event and a couple of extra days. Here are a description of the packs:

This content is Legacy-legal. Meaning that you will be allowed to use these cards in every Legacy Event.

The team here at Oktagon wanted to release a new event type close to our 1-year anniversary as the developers of MtGPQ. We also wanted it to be something exciting that the entire community could join in.

A long-time request of veteran players is to have events that reflect tabletop MtG’s supplementary products (Planechase, Commander, etc…), so we moved towards adapting one of those as the new event type.

We also wanted it to be accessible. Out of all supplementary products the one that presented itself as a great way to introduce players to the community was the Duel Deck model: two predefined decks that present a complete and interesting experience to new and veteran players alike when played against each other.

We also wanted players to be able to participate at least, in some way, if they were not PvE-only or PvP-only fans. PvE fans can explore both sides and still play the PvE nodes for the entire duration of the event. PvP fans need only to complete the objectives of the side they wish to represent in the PvP Phases.

Finally, to tie it all up: the reward structure. It is tier-less and coalition-less so that players, with small or large card collections, can feel motivated to participate and (re)join the community.

With the need for a refreshing new event type being covered, we will now move our focus to improving your, the players’, quality of life. What does that entail? We intend to concentrate our efforts in features that make your experience more enjoyable and smooth overall:

Keep in mind that, in order to keep delivering content, these changes will be made slowly. However, in time, they will get done.

We here at Oktagon are always thinking on how to bring exciting new content and improvements to MtGPQ and we hope you enjoy our very first new event type.

Like what you hear?! If so, we are going to try something new here that we haven’t done this wide before. We would like to invite you to a Beta Test for the upcoming Duel Deck Event. Please head over to our Google Form and give the details a read. Please note, not everyone will be selected and there will be three runs of the Beta Test.  Once the Beta Test is complete, we hope to make the new event live for everyone in mid-October.

We thank you for your help and we hope you enjoy the new event!