THE WAR HAS CHANGED.

After several months of internal development, we are excited to announce that next week on July 20th, G.I. Joe: War on Cobra is updating to version 2.0.

This update completely revolutionizes the gameplay experience, with major changes to base building, combat, unit design, and much more!

In this blog we’ll discuss all the upcoming changes and detail how commanding your troops on the battlefield is going to evolve. 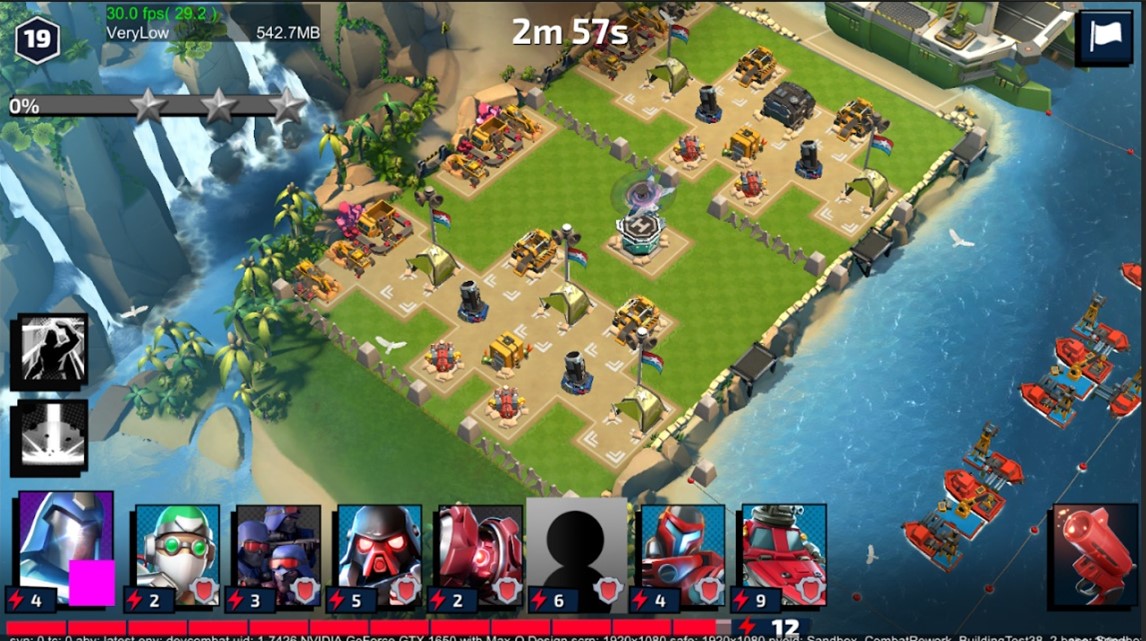 Build your Joe or Cobra base anyway you please.

We’re removing the shackles of the previous system.  You’ll now have access to multiple versions of almost all buildings, and the freedom to build them wherever you want.

We have introduced an overall building cap that, as long as you remain under it, allows you to customize and improvise your defense like never before.

“You are deceived! This is no mere camp, it’s a fortress!”

When acquiring buildings from the store they’ll instantly be placed in a new building inventory, and rather than dragging them around directly, you’ll use the new “EDIT BASE’ mode designed to streamline and simplify base construction. 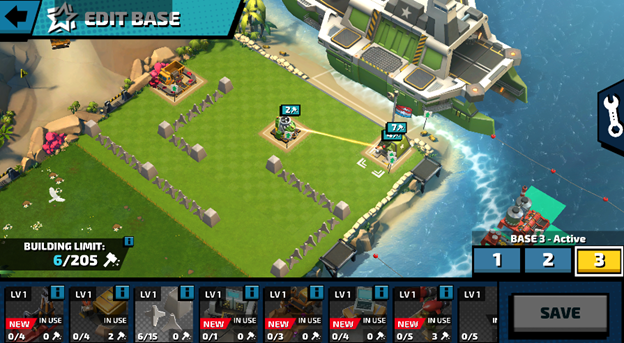 We’re giving players two additional bases per faction, so you’ll be able to construct multiple unique standalone “Base Loadouts”. Similar to the premade unit rosters, each base can be as focused or as varied as you need them to be.

Worried your base has a glass jaw? Give it a stress test. With the new EDIT BASE mode you’ll be able to recon all three of your bases to identify any weakness in their defenses. 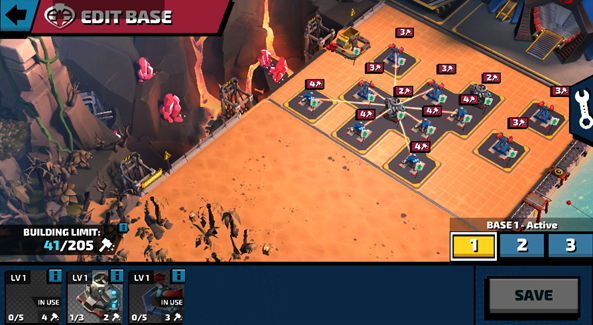 Players will now have a “Building Point” limit for each base, determined by your HQ level, that caps how many buildings can be built, with each building having a specific Building Point value.

One of the defining features of the 2.0 update is a massive shift towards strategy during battle.

We’ve made sweeping changes to all areas of combat, both to the core mechanics as well as the units themselves to deliver a more strategic experience. We felt this was a necessary move to help support a longer-term approach to gameplay enjoyment.

Now with custom bases, more defined units, and mechanics, you’ll have an almost limitless amount of bases and counter-play to strategize over.

“Hard Master would have admired the emotionless efficiency of these Drones”

We’ve looked at every unit, building and command and taken an uncompromising approach to the existing design. No characters were off limits. 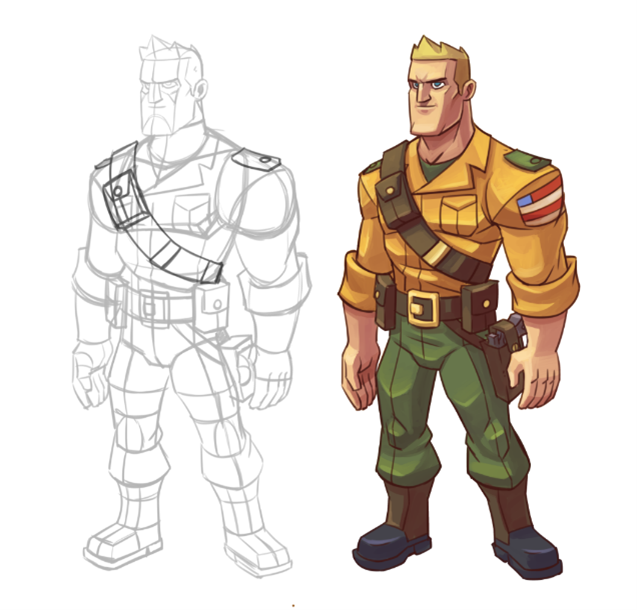 Extensive stat changes to every unit in the game gives them more purpose, strategy, and opportunities to counter. Rather than using the same group of units over and over, players will need to make decisions based on the type of challenge in front of them.

As an additional resource, extensive work has been done to the design ‘under the hood’ to allow you access to almost all attributes in the game. Players will see a much more informative Unit Menu now in game.

One major switch in design has been Armor. What used to be an additional bar of HP for units is now a defined Armor Value that reduces damage taken by the amount.

That said, don’t pin all your hopes on one glorious steel behemoth! There are some armor piercing exceptions, such as the Cannon, which ignore Armor completely.

We’re changing air/anti-air combat so that it’ll be less dominated by “hard counters”. Missile turret range and effectiveness will be reduced, more buildings will have the ability to chip away at them and missiles fired from any unit or building will do huge extra damage to flying vehicles specifically.

Ever looked out over the beautifully animated water of your base and thought “Why am I not taking advantage of this?” So have we.

To rectify that thought we’ve decided to increase the playable and buildable water areas in your bases by 50%. On top of that we’re adding more buildings that can be built on water and allow them to take less damage when they are.

But watch out for torpedoes! They’re a high-damage counter to all buildings and units in water.

As we began reimagining the design to provide more strategic gameplay, one topic came up over and over again. The AP bar.

Well, we’ve taken a cold, hard look and decided to change how it works. No longer will it fill up with the destruction of enemy buildings, instead it’ll fill up at a fixed rate over time. We want to limit the “steamroll” effect that occurred when you gained an early advantage in AP, and prevent immediate loss when your early battlefield losses resulted in zero AP and no way to deploy further units. 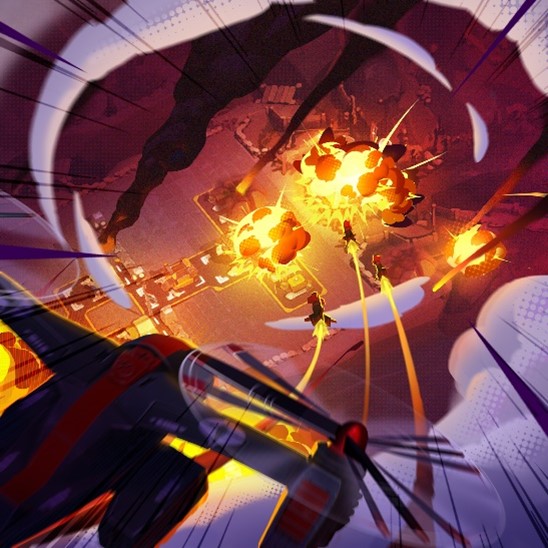 We love the way battles play out now!

We’re removing command charges and instead all commands will be assigned an AP value like units. This means you can take advantage of command abilities more frequently, drawing upon them freely in a tight situation or when you have excess AP and need to push your troops to victory.

“The hallmarks of victory are commitment, perseverance and unity of purpose”

A few more significant changes to be aware of. 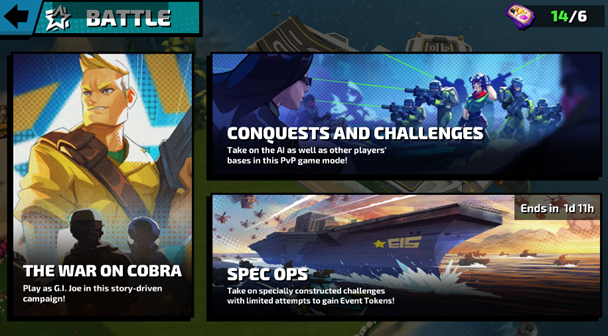 Loading screens are fun, right? Well, not so much.

So to make navigation simpler and get you back to the frontline faster, we’re removing the World Map. Now you’ll simply load up into a battlefield, customize your unit roster, and jump straight into the thick of the action. We may bring it back at a later date if we have time to design it the way we always intended.

Are you the type of commander that gets down and dirty in the digits?

To help, we’re expanding the range and scope of info display for every unit, allowing for more accurate and detailed statistical info about each unit and their specialised abilities.

Info fields like Rate of Fire, Damage per Hit, Area of Effect, Target Type, and others will be more clearly expressed, allowing you a greater understanding of your unit’s unique capabilities and strategies.

To remove barriers, and help streamline gameplay, we’re removing unit injury entirely. Units recently deployed will be able to get right back in the fight at full strength.

[Translation] – “To know honor, you must first know yourself.”

As you can see, we’ve been busy! We hope everyone enjoys the upcoming changes to the game in the 2.0 update.  Please let us know what you are excited for most and we will catch you on the battlefield!

G.I. Joe: War on Cobra is now available on the App Store and Google Play! Click the PLAY NOW button to start your battle today!