INTERVIEW WITH ELOY FROM THE MPQ MASTERY YOUTUBE CHANNEL 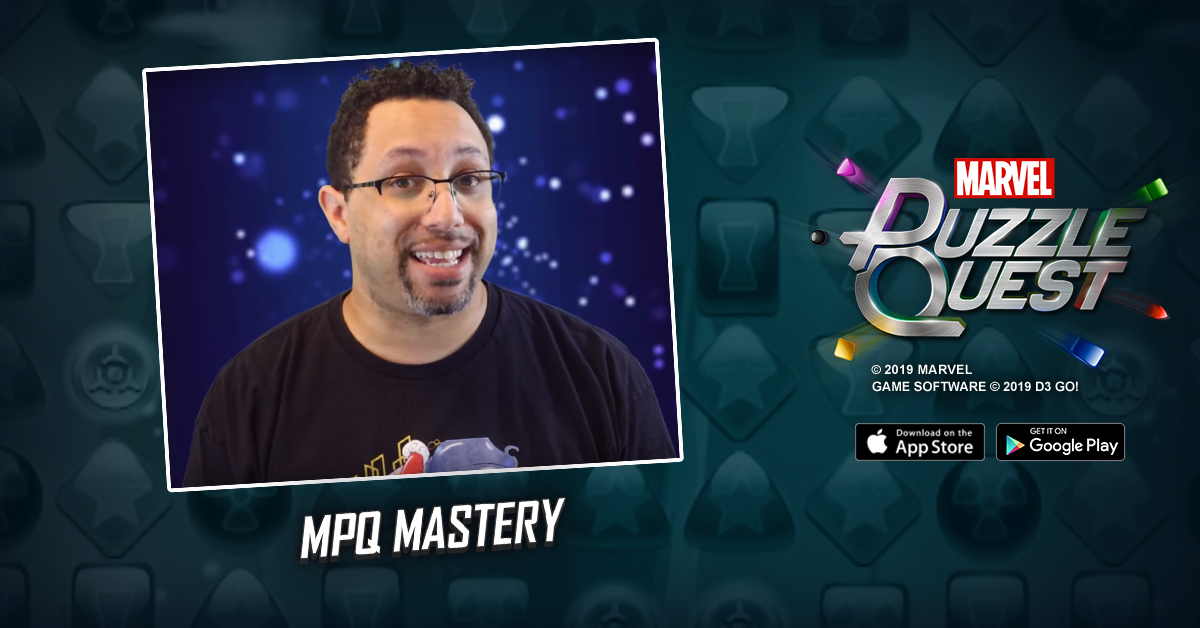 Destroy. More. Gems. –  This is the goal of the MPQ Mastery YouTube channel created by Marvel Puzzle Quest fan Eloy Lasanta, to help players along their journey in the game.  The channel already features dozens of videos featuring helpful tips, strategy based on whatever your experience level is in the game, in-depth character info, and just have fun with some potential possibilities that Eloy and his subscribers can come up with.

We sat down over email with the show host and creator for this month’s Community Spotlight to discuss his history with the game and goals for his channel.  We hope you enjoy the interview and be sure to check out his channel!

D3 – First off, tell us a little about yourself?

Eloy – Well hello there, I’m Eloy and I’m a writer and game designer from Tampa, FL… not born and raised, but I’ve lived here a long time. Gaming has always been a part of my life, whether it’s a board game, card game, MMO, or mobile game. My love of gaming (in all its forms) led me to pursue a career in the RPG industry, where I have designed over a dozen games myself and contributed to a few other big ones from other companies. I’m known for meticulously picking structure apart to figure out how mechanics tick, cause once you figure that out… making something new is really easy.

And for some reason, I love match-3 type games. It started with Bejeweled, which then evolved into Puzzle Quest and then eventually to several other iterations of that format. And then one day I found Marvel Puzzle Quest and I had found THE game for me. Its design concepts are deep and the balance is so well executed, it scratches my match-3 itch and my love of Marvel comics all in one fell swoop.

What prompted you to start a MPQ Mastery channel that features Marvel Puzzle Quest?

I’ve been on YouTube for a few years now, producing content for some of the niche communities that I belong to, and it just kind of dawned on me one day that I could take all the knowledge of video creation I knew and apply it to this amazing game, Marvel Puzzle Quest. Like, literally, I’m over 2000 days in at this point, I play every day come rain or shine, I’ve been playing since the beginning and have seen so many changes in the game that it’s staggering how it continues to surprise me every time. I’ve learned so much about game design and fun from playing this game.

So why not support the game that has become such a huge part of my life, the game I spend hours talking about already anyway? Why not do that and also hit record? It made perfect sense for me, and I couldn’t be happier with the response. Not only have other vets of the game checked out my channel, MPQ Mastery, but I’ve been able to inform and bring in new players. That’s the goal here. If I can get people excited about the game, give them some cool nugget that keeps the players coming back, then the game continues on and I get to keep having fun. Yes, it’s for the community, but it’s also partially self-gratifying as well. haha!

Tell us a little bit about the process of creating a video.  Like where do you get your ideas, how do you put it all together, etc.

That’s an interesting question that, of course, I’m more than happy to answer. The first thing I’ll say is… it depends. I’ve been experimenting with a lot of different kinds of videos on MPQ Mastery so far, still trying to see what hits big. My ideas come largely from playing the game and realizing “Man, I wish someone had told me this a long time ago!” With YouTube being THE place people go looking for answers nowadays, again, it made sense to do a channel to address these sorts of things.

One kind of video I make are my MPQ Team videos, where I break down teams of three and provide a strategy on how their powers synergize together for great effect. Coming up with creative combinations is the highlight of my day! I also like to bring up random discussion points, to get people talking about the game itself. This includes my video I did to talk about Environment Tiles and possible ways to bring them back, another where I talk about the perks of the VIP Program, and another where I talked about changes to one of my fave characters Mister Fantastic. These are things I talk about with my friends anyway but connecting with the community at large with these types of discussions is super important for the game to keep growing.

My favorite type of video are my theoretical characters builds. Remember, I have been designing games for over a decade and this is one of my favorite games, so the gears of my mind are always turning, thinking of new ways to represent my favorite characters within the context of Marvel Puzzle Quest. So far we’ve done Captain Britain, Davos, Killmonger, and even Sabertooth (before there was an official character created for him). These types of videos are so fun and stretch my design legs in a way that other players can engage with as well. We are a creative bunch after all.

But coming up with a video idea is just the start. After that comes scripting, recording, editing and effects, working on thumbnails and keywords and titles and all the things the YouTube algorithm loves, and all of this can take hours for even a quick 5 minute video from beginning to end. That’s kind of the reason why I release only a couple videos a week. They are pretty time consuming to create and get right. I also really try to go outside of the kinds of MPQ videos you can find already on YouTube, which are largely actual play videos. With MPQ Mastery, we are building a new community where we are spurring discussion about the game and its strategies, similar to the D3 Go! forums or the MPQ reddit, but also distinctly unique and creating a new space to continue the dialogue.

What are some of your favorite moments from the game?

There have been some really great character additions for those heroes and villains that have been my favorites for my whole life. The day that Nightcrawler was added to the game I was ecstatic, as I was for Kitty Pride, two members of my favorite team, Xcalibur. There’s also the fact that when Jessica Jones was introduced, and I have no clue how this happened, but I pulled 20 Legendary covers and 15 of them were JJ, allowing me to champion her almost immediately. The game loved me that week for sure!

I was also happy when Supports were added to the game. This is not only a cool way to have representation for some of the lesser characters that, in all honesty, don’t really deserve their own character build (except Ebony Maw… come on now!) but it’s also a fun way to enhance the customization aspect of Marvel Puzzle Quest itself.

Oh, and of course costumes. Need I say more?

So are you an MPQ Master?

Hahahaha! Am I a master? I know a lot about Marvel Puzzle Quest and I’ve been playing for a long time, but really, most likely not. But that’s also part of the goal of the channel. If we all exist in a vacuum, then we can’t grow. But by sharing our thoughts and ideas and designs and strategies for this awesome game with each other, we can all grow and become that much better. Through MPQ Mastery, we can all attain the level of Master together. It’s a lofty goal, but it’s one I see as both highly attainable and exciting to pursue. And even if we don’t get there, we’ll have fun along the way.

Thank you for sharing your story with us, Eloy! It’s fun to see the process of how you put together your videos!

Thanks so much for having me! It’s been a pleasure to answer your questions, and I hope to continue the discussion on my channel at MPQ Mastery or you can all hit me up on Twitter @MPQMastery.