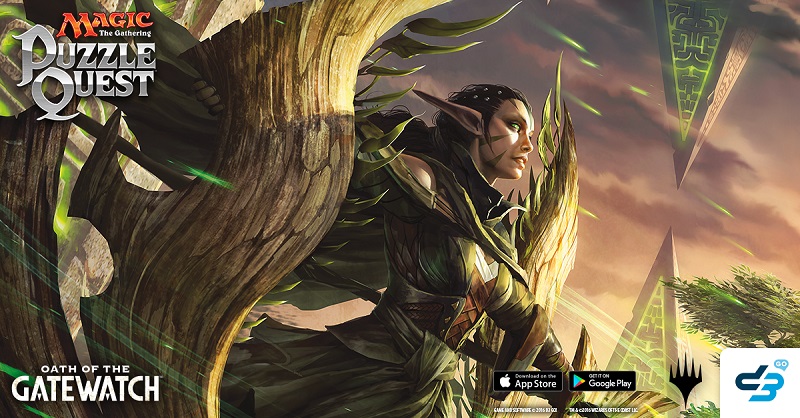 The Magic: The Gathering – Puzzle Quest 1.5.8 update is now arriving – and the release adds the new Color Mastery system and Nodes of Power PVP event to the game. Read on for all of the exciting details!

● You accumulate points on each card in your deck at the end of every fight.
○ Only cards in your deck get points, so you’ll want to mix it up to master as many cards as possible!

● Each card requires different amounts of points to be Mastered ­ few for Commons, lots for Mythics!

● When you enter an event (such as the Nodes of Power event), you will be set in a tier depending your Color Mastery, from Bronze to Gold.
○ The event’s color determines which Mastery the game looks at ­ for example, a Blue­-only event would only consider Blue Color Mastery.
○ Events that do not have color restrictions take your entire Color Mastery into account.

● Each Tier in an event gives different rewards, and higher tiers give better rewards!

● Nodes of Power is the premier Player vs. Player Event in Magic: The Gathering ­ Puzzle Quest. Battle decks made by other players to win exclusive rewards!

● Face other players for control of the five shards of mana. Each node requires a single Planeswalker that you will use from start to end of the event. Once locked, each Planeswalker you use on that node will fight enemy Planeswalkers and decks crafted by real players. The more victories you earn the more rewards you will win. Reach the top brackets before the event ends to earn the best rewards.

● Rewards: Test your mastery of the colors in the Nodes of Power event. Reaching higher Color Mastery tiers will earn you better rewards.

○ Gold Tier: In the top tier, you’ll earn even more Mana Crystals and Runes by completing encounters. In addition, you can earn an OGW booster with a guaranteed Rare card. Climb the leaderboard to win bonus Mana Crystals, BFZ Booster Packs and OGW cards. The top five players will receive an OGW Mythic card, 125 Mana Crystals and a BFZ Fat Pack.

● Abilities no longer activate when failing to deal damage to Planeswalker with Orbs of Warding on the gem board.
● Multiple cards’ abilities no longer fail to trigger when dealing direct damage to an opponent Planeswalker.
● Correct amount of Activate gems are created when casting Disciple of the Ring card.
● Summoning sickness now functions correctly when a creature cast this turn moves from the first card slot to the second card slot with Strider Harness on the battlefield.
● Card is no longer cast when Gruesome Slaughter’s mana cost is filled while there are no opponent creatures on the battlefield.
● Card’s mana cost is no longer increased for each reinforcement when a creature is returned to hand while Quarantine Field is on the board.
● Fetched card no longer loses all mana when Ulamog’s Reclaimer’s ability activates after Bring to Light is cast.
● Opponent’s creatures no longer fail to be Destroyed when Smothering Abomination is the only creature on the user’s side at the beginning of their turn.
● Plains Elemental tokens no longer fail to receive Lifelink when Ondu Rising’s Awaken mana cost is filled.
● Planeswalkers heal correctly in the back end when waiting to heal while in Events.
● Fixed multiple issues occurring when viewing Koth of the Hammer’s abilities.
● Creatures with haste no longer fail to attack on the turn they enter the battlefield when returned to the battlefield from the graveyard.
● Fixed multiple issues that occurred when swiping gems after “No More Moves!” pop up displays with Activate and Support gems on the board.
● Landfall ability reacts as expected when matching Void gems.
● Fixed errors related to Sword of the Animist’s use of Equip the Sword.
● Fixed functionality for opponent’s use of Drana’s Orders, Slab Hammer, Lithomancer’s Focus, Infuse with the Elements, and Might of the Masses.
● Planeswalker’s health no longer reverts to the value it was before entering the encounter when closing the app.

*Many additional bug fixes also implemented and not mentioned in the above notes.