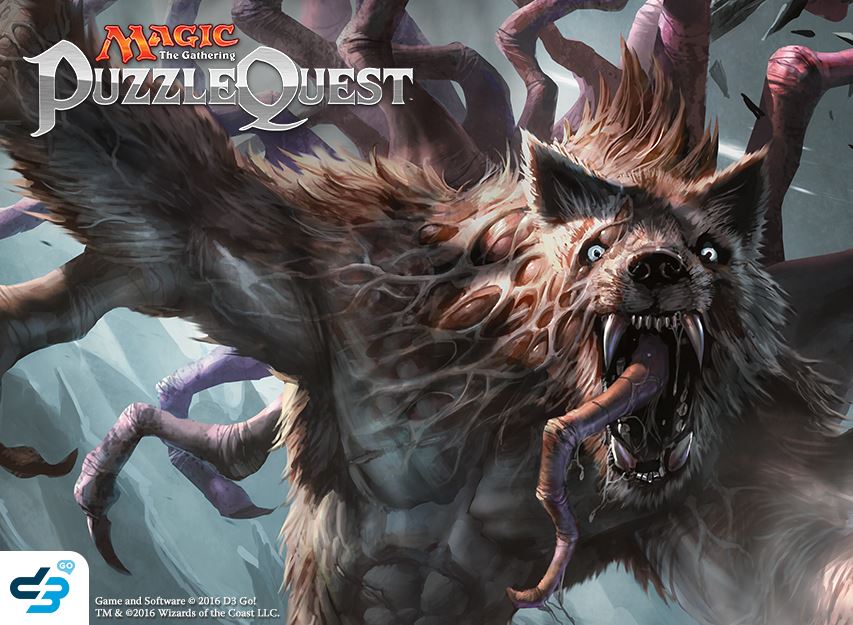 Hi, everyone and Happy almost-Halloween!

The 1.7.1 update for Magic: The Gathering – Puzzle Quest is now live. Awesome new features include; speedier gameplay, the Emrakul’s Corruption event, and lots of exciting Eldritch Moon cards. Read on for details!

We are introducing a new card set to the game: Eldritch Moon! Follow the end of the Shadow over Innistrad story with the reveal of the Eldrazi titan Emrakul!

We are also introducing two brand new mechanics to the game, Meld and Emerge.

Another advantage of Meld cards is that once the transformed version is on the battlefield, either version of the sibling cards will reinforce the creature, making Meld cards much easier to reinforce.

Emerge is a new ability that some cards possess. When a card has the Emerge keyword, it gains mana equal to the listed number next to it every time a creature you control dies.

We have updated the Activity Hub to be easier to read and navigate through categories. Events and Special Offers now rotate on their own categories, reducing the amount of clutter the menu would present – you can now also much more quickly go to your Free Boosters and cycle through your events, event rewards with a lot of ease.

As some of you have noticed, in the previous update we improved the summoning speed for tokens – they are now greatly faster.

In following with this, we also improved the animation speed of the following visual elements:

Mana Trails
Reinforce
Gem Drops
Drawing Cards
Casting Cards
Start of your turn
VS Screen
Discard Cards
Transforming Cards
Creatures attacking
We will continue to look for opportunities to see where we can improve the speed of the game to provide a better experience.

Emrakul is back with avengeance in Eldritch Moon! Emrakul’s Corruption is the newest event in Magic the Gathering: Puzzle Quest. In this PvP event, you’ll battle decks created by other players, fighting over three nodes – each with special bonus objectives.

Compete in Emrakul’s Corruption, and other weekly events, to win Mana Crystals, Runes and Boosters. In addition, each weekend event will feature an exclusive Rare card. Members of the top ten coalitions in each event will receive a Mythic Card from Eldritch Moon. For full rewards information, click the “Rewards” button in the Event menu.

Eldritch Moon will have a brand new selection of special offers – including Planeswalkers, Mythic cards and special bundles.

Check in every week for new limited-time offers!

Tokens no longer freeze the game intermittently
Clues can no longer be in a player’s hand
The following cards no longer fail to process all of their abilities if one part of their abilities fails to process:
Anguished Unmaking
Ayli, Eternal Pilgrim
Chandra’s Fury
Curious Homunculus
Demonic Pact
Disciple of the Ring
Emrakul, the Promised End
Grasp of the Hieromancer
Hydrolash
Prism Array
Retreat to Coralhelm
Retreat to Emeria
Ruthless Disposal
Seasons Past
Seek the Wilds
Smothering Abomination
Stensia Masquerade
Tainted Remedy
Void Winnower
Whirler Rogue