“When a creature you control with base power 3 or less deals combat damage to your opponent’s Planeswalker, if this is the first card with Ninjutsu in your hand, increase this card’s Ninjutsu value by 1. At the beginning of the combat during your turn, if this creature’s Ninjutsu value is equal or greater than the required value, replace the target creature you control by this. Then, this creature gains haste until end of turn. Return the replaced creature to your hand.”

Ninjutsu is an ability related to creatures with the Ninja Subtype. It is an alternative way to put Ninjas into the battlefield and may trigger powerful effects while allowing the players to use their mana for other cards. Attacking with low power creatures will increase the Ninjutsu Value of Ninjas in the player’s hand until the required value. To better avoid excessive decision making in Magic:PQ, cards in hand with complete Ninjutsu Value must enter the battlefield at the beginning of combat, substituting another creature. Once they come into play using Ninjutsu, these creatures gain Haste so they may attack right away.

“When you exile this card from your hand, if it has mana equal or greater than its Channel cost, perform that Channel effect.”

When Exiled from the player’s hand with a given amount of mana, cards with Channel perform special effects, providing extra versatility for the player. Some cards have 2 Channel abilities and, in Magic:PQ, players may activate only the first one, by exiling the card with minimum mana for only the first ability, or activate both abilities when they exile the card with the minimal mana requirement to activate the second Channel ability as the requirement for the first ability would be already met.

Reconfigure is an Evergreen found only on Support cards:

“When this card enters the battlefield or when you match this support’s gem, if you control less than 3 creatures, create this card’s reconfigure token. ”

Supports with this Evergreen will Buff the player’s first creature only if the player does not control the related Reconfigure Token. Meanwhile, all theses Tokens posses the Reconfigured Evergreen:

“When you cast a creature, if you control 3 creatures, replace this one ”

Therefore, Support cards with Reconfigure will generate their related tokens if the player has available space on the battlefield and, if they can’t, the Support will Buff the player’s first creature at the beginning of combat. Also, if either the token or the Support is destroyed, their related counterpart will be destroyed as well.

“This card may receive effects from Vehicle cards with Crew equal or lesser than this card’s Pilot value.”

Vehicles in Kamigawa: Neon Dynasty will give Pilot to a creature with high enough power value when they come into play. Some creatures also have the Pilot Evergreen inherently. Vehicle Supports of this Set will only buff creatures with Pilot value equal or lower than the Vehicle’s Crew Value. If a player controls more than one creature with Pilot, one same Vehicle Support may Buff all those creatures if their Pilot Value is high enough.

“Modified creatures are creatures that are Buffed or have a Pilot evergreen.”

In Magic:PQ, Modified will work as a hint. Therefore, it will not have an Evergreen. If a creature is either Buffed or has the Pilot Evergreen, it will count as a Modified Creature which may interact with other cards in favor of the creature’s controller.

“At a young age, the Emperor of Kamigawa’s encounter with the Artificer, Tezzeret  made her Spark ignite, causing her to Planeswalk away from her home plane. The event, however, also made her Spark unstable, demanding the Wandering Emperor to greatly concentrate just to avoid unwanted planeswalking. Finally, she comes back home thanks to her friend Kaito and the Soratami Tamiyo, and she will use all her might to help her people once more.”

“When you cast the first card during your turn: Gain 3 life. When you activate a Loyalty ability: This support loses 2 shield.”

“Partially composed by the magical alloy, Etherium, the Planeswalker Tezzeret is always scheming, craving for more and more power. Years ago, he came to Kamingawa and tried to control the powerful Spirit, Kyodai. Now, he’s back with a powerful ally in Jin Gitaxias. What this Etherium augmented Artificer might be planning this time?” 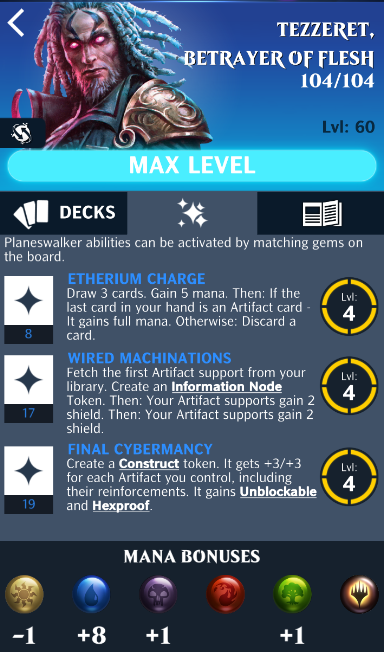 “When this support gains shield: The first Artifact card in your hand gains X mana. X is the number of Artifact cards you control.

When you match this support’s gem: Draw a card.”

“Kaito was raised in the Imperial Palace alongside the Emperor Herself. When an attack from the Planeswalker Tezzeret caused his friend’s disappearance, Kaito left in search of answers. After spending some time with both the Reckoner and the Futurists, Kaito is now an accomplished Cyber Ninja and awakened Planeswalker. He recently took notice that his mentor, Tameshi, betrayed the Futurists and is helping a mysterious creature known as  Jin-Gitaxias. With help of the Planeswalker Tamiyo, Kaito sets out to find the truth and his old friend, the Emperor and stop his former mentor’s plans.” 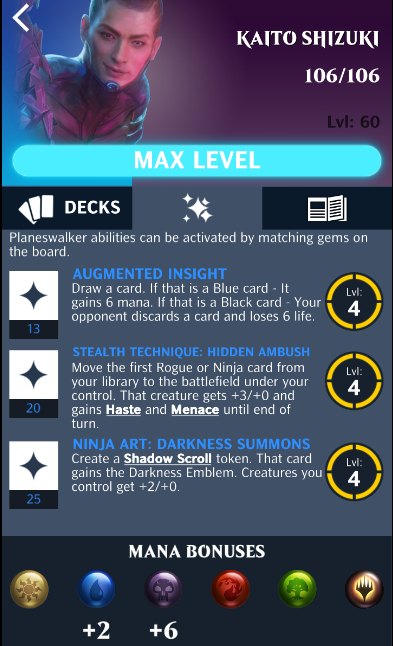 “When a creature you control deals damage to your opponent’s Planeswalker: Pick 1 of the first 4 creature cards from your library. Fetch that card. It gains full mana. This effect can trigger up to 2 time(s) per turn. If this support has the Darkness Emblem – Your creatures gain Unblockable.”

“Originally from the plane of Kamingawa, Tamiyo used her Planeswalker powers to travel the multiverse, observing, learning and registering what she saw, hardly interfering with history. This time, however, she was forced to act as her home plane was in danger. In the end, she was captured by the enemy and infused with Phyrexian technology. What shall be the bidding of her new masters?” 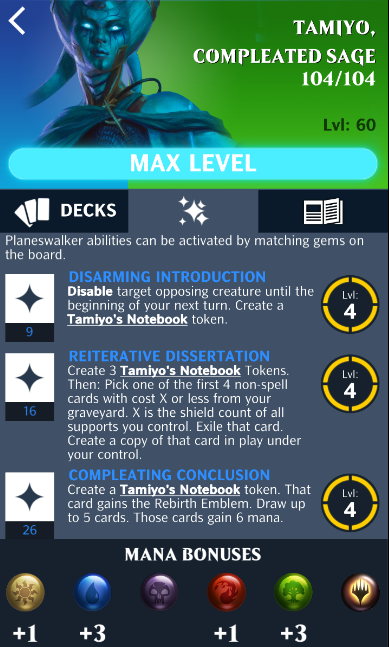 Convert a gem to Green and a gem to Blue.