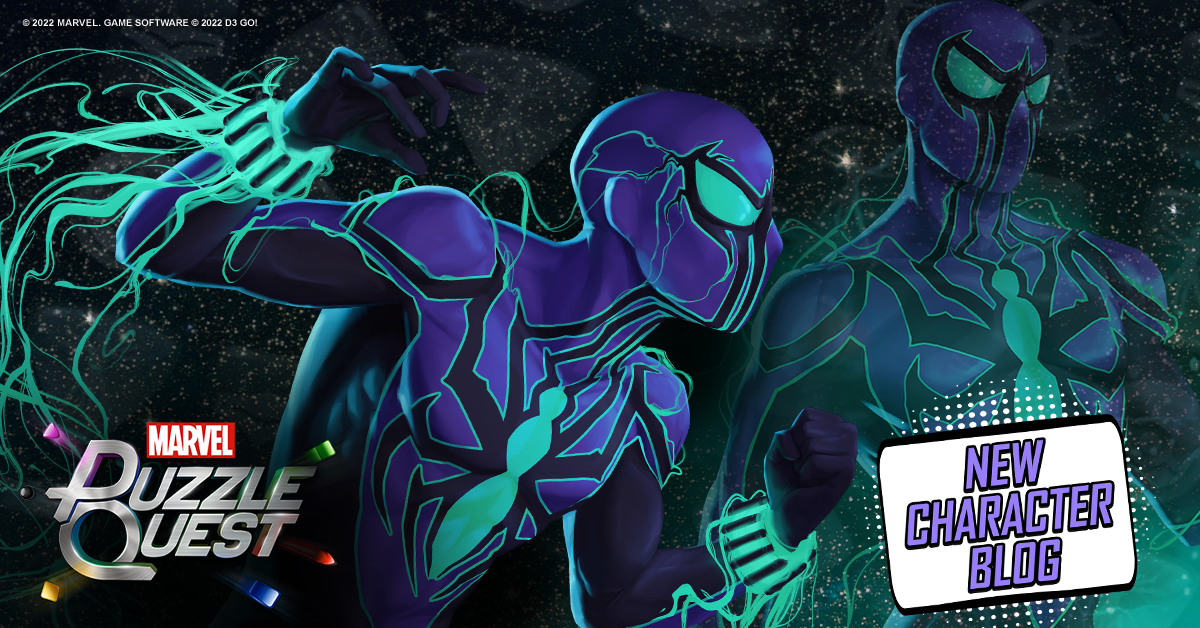 Back by popular demand, we are reintroducing the New Character Blog to give a little more detail about each new character release to help your MARVEL Puzzle Quest play.  We hope you like it and we encourage you to let us know on our socials how we can provide more info that you want to see in these in the future.
–
Chasm has made his way to MPQ and he’s looking to twist and change the way we play! We are always so fond of celebrating characters from the comics and we couldn’t be more excited to bring Spider-Man’s newest villain and Ben Reilly’s latest incarnation to MARVEL Puzzle Quest! And with this year being Spider-Man’s 60th Anniversary, the timing couldn’t be better.

Chasm (see announcement for character info) comes equipped with a purely passive set of abilities, but don’t count on that making him a character to be played passively. Chasm is a deeply complex character that will have you questioning the optimal strategy for every move, friendly team composition, and counters to your opponent’s lineup.

At his heart, Chasm is an AP controller. His level of lethality shifts based on AP that players have earned while strategically denying and leeching AP gain at every turn. His Purple Passive “Empty Inside” halts start-of-match passives dead in their tracks, stopping early board setup plays like 4* Rocket and Groot or 5* Beta Ray Bill cold. His match damage is also passively increased based on how close all AP is to zero – this means that Chasm is at his strongest on the first turn, so make it count! It also means that you and your opponent will have somewhat different goals: you’ll be trying to keep your stockpiled AP to an absolute minimum while your opponent might be thinking the opposite. Astute players will notice that this is opposite how another passive only character, America Chavez, works so the play style will be quite a bit different.

Along with Chasm’s debut comes a unique tile: Abyss. Abyss tiles are created when Chasm makes matches. The catch? Abyss tiles don’t generate AP when matched. This allows Chasm to reduce AP gain for both teams and puts a whole new spin on color denial. These Abyss tiles can spell trouble if not removed quickly enough, as Chasm’s passive uses them for a constant drain in AP to the opponent’s front character, and while clearing them from the board can grant some respite, doing so creates Web tiles that then heal Chasm. Diabolical.

Chasm is a horrifying opponent. His Stare Into the Void ability freezes foes dead in their tracks on turn one, setting you up for a big head start in dominating the board. With such an imposing presence, he’s bound to be a priority target. Singling him out, however, may not be the best move. Chasm’s Stare Into the Void has another, more sinister power. Remember those Abyss tiles? If enough of them are on the board, Chasm revives and his reign of AP dominance resumes!

When facing opponents, wreak havoc on heroes like Shang-Chi with abilities that align with Chasm’s strengths. Denying Shang-Chi’s purple matches and flooding the board with Abyss tiles can stop him from launching those devastatingly huge matches that win games outright. Also, when shifting who among your opponent’s lineup is in front, consider their abilities and color strengths to best take advantage of Abyss tile AP drain. Lastly, punish characters that benefit from hoarding AP like America Chavez by turning their greed into your own strength. 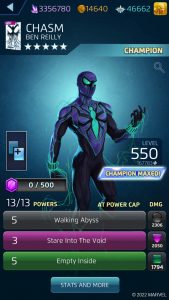 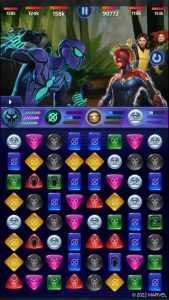 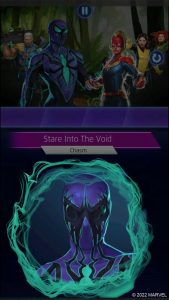 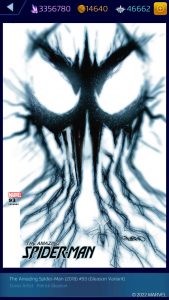 When forming teams around Chasm, seek partners that span all colors to maximize overall match damage while keeping Chasm’s passive match damage bonus high. This means that characters with pure passives are going to result in missing out match damage and AP spend. You’ll also want to prioritize characters with cheaper abilities, although expensive powers that ruin your opponent’s AP supply are welcome considerations (like Doctor Strange (Sorcerer Supreme) or Kingpin (Spider-Verse)). Remember that Chasm’s matches create Abyss tiles which are key to keeping the board clear of AP, which not only limits your opponent’s choices but also maximizes Chasm’s match damage. He also synergizes well with Spidey characters because of the benefits he gets from Web tiles.

Chasm is a character that defies MPQ norms, and we can’t wait to see how players unleash him on the board! If foiling your opponent’s plans, outsmarting through superior team picks, and disrupting meta play excites you, save a roster slot for Chasm!

Behind the Quest (Scenes):

James Finley (Game Director): Every now and then I think it’s important to push the boundaries of what characters can do in MPQ. Chasm is a big departure from the sort of special tile meta that has been seeing a lot of attention. We want to continue to create characters that are relevant for that sort of play, but we also want to do things that are radically different. Chasm felt like a great character to bring control and complexity to the board while still maintaining a high level of accessibility through a passive set of abilities.

Joe Fletcher (Game Producer): Creating an all-passive ability character has been a challenge. It’s easy enough to put together three different abilities that just don’t cost any AP, but making all that come together into a cohesive whole is difficult. Especially when you have to consider the fact that characters aren’t necessarily fully covered. Chasm does a great job of splitting that difference with every ability not only feeding into another, but working well on its own. This makes a starter Chasm dangerous and a fully-covered one a nightmare.

Trevor Tomey (Design Director): One of our character goals is to tell their story through their art and their abilities, and Ben Reilly’s recent Beyond arc has so much to tell! We wanted to reflect the mental anguish that drives Ben’s journey to becoming Chasm, and the visceral imagery used to represent it in the comic with the Abyss tile and his AP control. But ransacked memories or not, he’s still a Spider-Man – so we made sure to give him his Web tiles and some healing on match to reflect whatever’s left of the good in his identity. Finally, Ben’s uncomfortable familiarity with coming back from the dead and Chasm’s spooky new costume were too good not to work into his design :).