We are back with the latest installment of the new character blog and this time we are switching gears a bit to meet-up with the team behind the art of MARVEL Puzzle Quest and the work they have done for She-Hulk Origin, inspired by Marvel Studios’ She-Hulk: Attorney at Law, and She-Hulk Immortal, based on the Comic Series The Immortal She-Hulk. Amber Ansdell, art director at Broken Circle Studios, shares with us below some of team’s efforts behind bringing these in-game characters to MPQ life. 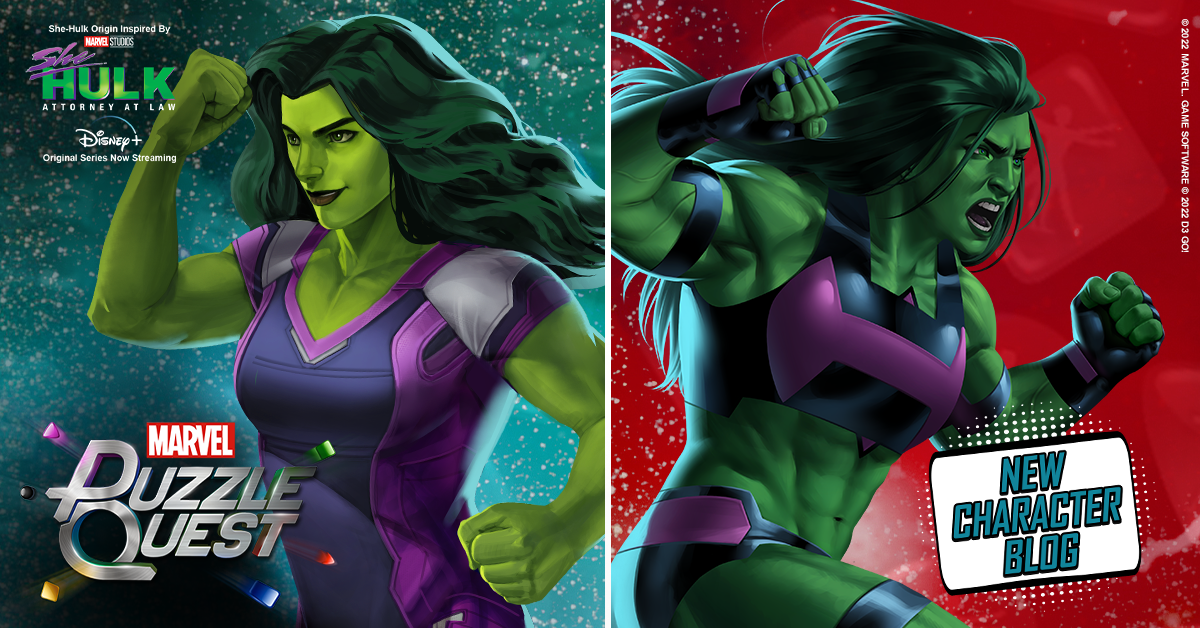 This month marks the release of not ONE but TWO She-Hulk’s with the newest MARVEL Puzzle Quest update of both She-Hulk (Origin) and She-Hulk (Immortal), two different versions of a great character! While each of these titans of the courtroom and cosmic battlefield are similar in name, we on the art team wanted to emphasize their key aesthetical and personality differences and really hone-in on what makes the iterations of them unique, diverse, and visually appealing.

The artistic process on this project calls us to be nimble and ready for any changes in iteration and execution of ideas from various groups. We’re always looking for concepts that push a character’s personality above all else. This involves A LOT of digital sketching, working back and forth and gathering feedback with fellow artists and directors, to really hit poses that feels like it sells the backstory and the overall vision of the character.

She-Hulk as a character contains multitudes, as evident in the countless number of stories she’s featured in. We wanted to give Heather and Michelle, our concept illustrators, the creative space to celebrate and explore She-Hulk’s key differences across stories and try to capture the personal and aesthetical factors of her portrayal in both She-Hulk (Immortal) and She-Hulk (Origin), inspired by Marvel Studios’ She-Hulk: Attorney at Law, original series now streaming on Disney+.

Heather Schwarz: A challenge for me was keeping her depiction with the theme of the source material; in Immortal She-Hulk, Jen Walters is hot off the heels of the Cotati invasion, in which she died (for the third time) and was resurrected by a mysterious Green Door. Grappling with the fact that she’s now effectively immortal, Jen reflects on her past deaths and multiple trips to the “Below-Place,” feeling uncharacteristically out-of-control and searching for answers. With that in mind, I wanted to portray her with a slightly more serious tone: a strong (obviously) and seasoned warrior, albeit with some anger issues and quite literally otherworldly internal struggles.

Michelle Hardy: When approaching She-Hulk (Origin) I had to consolidate the vibes expected from the fans of the comics in relation to her portrayal within Marvel Studios’ She Hulk: Attorney at Law. In just a few poses I had to answer the question, what was her personality? I had to balance between strong, confident, and feminine. She’s not just a Hulk. She’s an everyday real woman with a quirky, fun personality. I felt giving her a confident grin was a great way to show that side of her.  I feel the pose we ended with is a good representation of these efforts. Merging the comic nostalgia of the late 80’s and early 90’s with the new content was a challenge, but I feel we were able to pull it off.

Amber Ansdell: Along with character personality, reference gathering, character research, and experimentation factor into creating poses with energy, movement, and an emphasis on high impact with visual clarity.

Heather: With a character like She-Hulk (Immortal), as with any of the gamma mutates, it’s important to fully portray her immense strength. For an artist, this means creating poses and expressions that feel both natural and powerful, with a sense of momentum and weight. To achieve this, I studied bodybuilders and boxers, and explored poses with plenty of twist, with feet set far apart to lower the center of gravity, fists up and ready to fly in typical She-Hulk fashion.

Amber: As a director I was just so excited to be able to be a part of illustrating She-Hulk, both Immortal and Origin. It’s awesome to jam on a character with such visual appeal, complex background and cultural impact like She-Hulk. There’s so much to love about these two versions of this character! A sentiment Heather, Michelle, and I share.

Michelle: From an artist’s standpoint, I love her voluptuous hair! It was a lot of fun to paint. The hair really helps to sell the movement of a punch or throw!

Heather: I love myself a strong female character, and She-Hulk (Immortal) is the strong woman of all strong women. However, not only is she strong physically, she’s strong mentally– it’s not anyone that can battle her way through an intergalactic war, die multiple times, and come out on the other side in one piece.