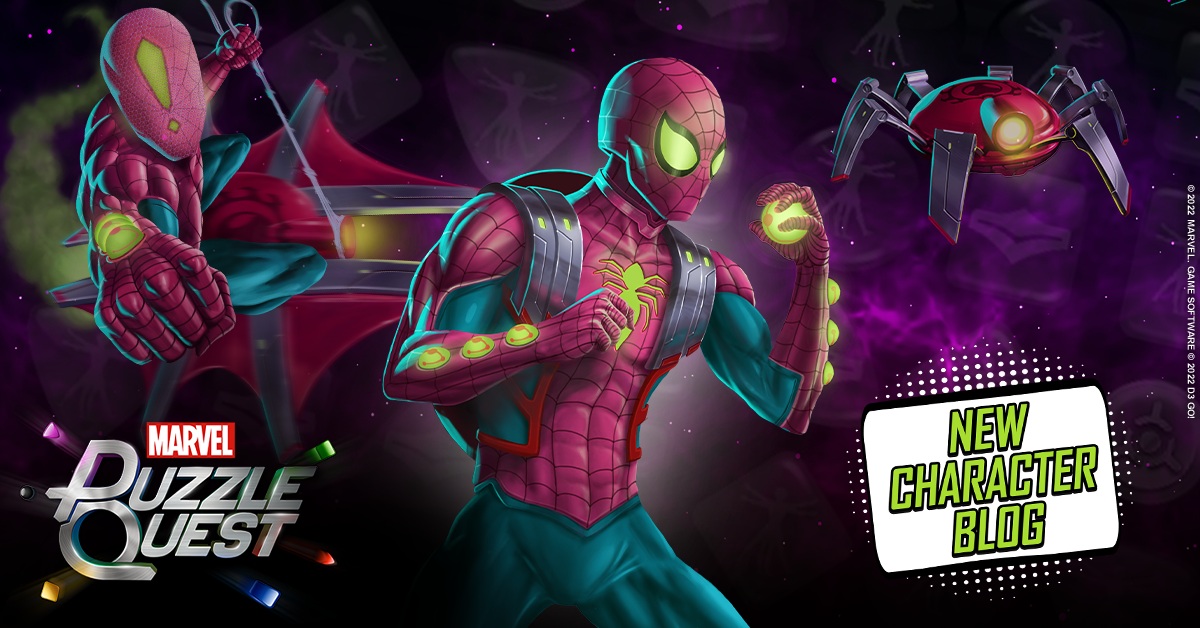 We’re continuing the celebration of Spider-Man’s 60th anniversary with the release of Spider-Man (Oscorp)! We’ve seen the web-slinger don many suits over the years, and while each has a special place in the hearts and minds of fans everywhere, the Oscorp suit is truly something special. Spidey’s gallery of rogues is among the most iconic in comic book history, but Norman Osborn stands out as the ultimate arch-nemesis of the beloved Peter Parker. As Green Goblin, ol’ Normie brings the near limitless technological capacity of Oscorp to bear, and MPQ’s latest addition sees Spider-Man upgraded with some of that very same tech! 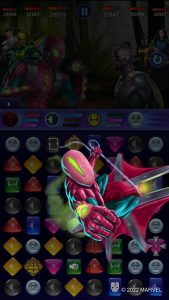 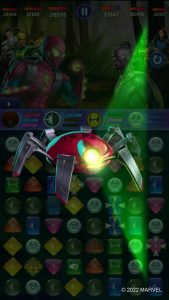 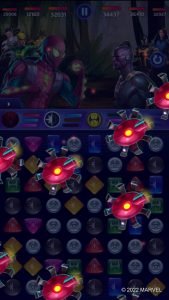 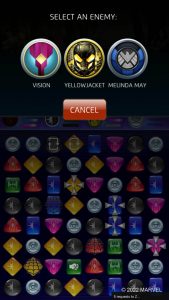 There are many versions of Spider-Man in MARVEL Puzzle Quest, and for good reason. From the comic books to the big screen, Parker has evolved substantially as a character. It’s impossible to pick one variation, and we consider ourselves lucky as we bring each incarnation to the game. Spider-Man (Oscorp) provided an opportunity to explore the sort of arsenal you wouldn’t expect to see Spidey with. Like a backpack glider. Or exploding spider bots. Or a helmet that can display emotes.

Webs have always been a crucial part of how Spider-Man gets around. They still are, except now he uses them to steer a lethal flying platform. Nice! Spider-Man (Oscorp) makes use of this tech via his Red ability Special Delivery: Spidey-Punch that cashes in Web tiles for big in-your-face damage. He leaves behind some Web tiles of his own following the impact, making him a great partner with anyone else in the Spider-Family.

That glider doesn’t just get Peter Parker from A to B; it’s smart enough to cause mayhem all on its own via Spider-Man (Oscorp)’s Blue ability, Spider-Glider. Create a countdown tile targeting an opponent that, while active, increases their damage taken and prevents a target enemy from using ANY of their abilities. That’ll keep em busy! Deploy this gadget on foes with powerful capabilities and use it as a distraction while you take the upper hand.

Speaking of technological annoyances, Spider-Man (Oscorp) has brought more than just his glider to the playing field. Armed with Oscorp Egg-Bombs that detonate and spawn Nano-Spider bots, the situation is bound to get more than a little sticky. These little robots go skittering across the board, leaving behind Web tiles and setting traps that can quickly tangle unprepared opponents.

Behind the Quest (Scenes):

James Finley (Game Director): One of the most fun aspects of working on MPQ is finding ways of representing Marvel’s amazing characters on the board. Making character abilities resonate with the core of that character’s identity is such a fun and rewarding challenge. Spidey’s new Oscorp suit allowed us to explore new takes on familiar territory. We think this variation of Spider-Man brings something new to the table and we’re looking forward to seeing him in the hands of our players!

Joe Fletcher (Game Producer): As we’ve said, there are a lot of Spider-Men in the game, and all of them have their own flavor. Sometimes, deciding on new and interesting abilities can be difficult because of other variants of that character. But for this version of Spider-Man, it was pretty simple to do by leaning into the Oscorp side of things. He’s still Spider-Man, still uses webs, but the gadgets are the focus here. These are what allows Spider-Man (Oscorp) to do the things that the ‘normal’ wall crawler can’t. After that, it was just a matter of nailing down the transition of in-page devices to how they’d act in-game!

Trevor (Design Director): With every character we design we try to identify some core, unique element to express and build around – for 5* Thor, it was an electric presence; for Chasm, it was the anguish of his piecemeal memories. Oscorp Spider-Man’s gadgets have a fun design that gives us a lot to work with; when I saw the Nano-Spiders, how could we not turn them into tiles that run around the board leaving a mess – and then hide to surprise you later :D? This is where I have the most fun, turning cool ideas into actual stuff on the board; and with every character, we’ll get better at communicating exactly what they do in the shortest form 🙂