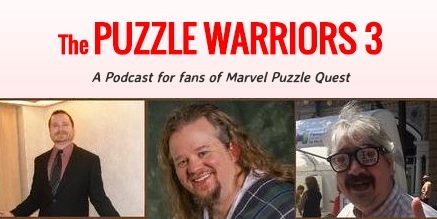 Hi, everyone. Today we’re shining the Community Spotlight on The Puzzle Warriors 3 podcast – a ‘cast devoted to all things Marvel Puzzle Quest!

This trio of MPQ-loving fans describe themselves thusly: “The Puzzle Warriors 3 enjoy coming down from Asgard to party and plunder. While pretending to be commoners from Midgard, they are long time friends who enjoy drinking, poker, traveling, and video games, especially Marvel Puzzle Quest.”

Let’s get to know the ‘Warriors a bit better…

D3 Go!: Hearty greetings, Puzzle Warriors 3 team! Thanks so much for speaking with us today. Let’s get started with a peek into the personalities behind the podcast. Where is everyone from and what do you do when you’re not playing MPQ?

Craig: I currently live in State College, PA, I moved here in ’93 to go to PSU and never left. When not playing MPQ I work for the local government as a System Analyst in the IT department. I enjoy watching sports, playing D&D, and shooting at the range. Let’s go, Pens.

Ian: I live in Willamsport, PA and I’m a stay-at-home dad. I enjoy traveling and playing pinball.

Ray: I also live in State College, PA. Originally from Ohio. Been in PA about 20 years. Work at PSU. Play a lot of Diablo and D&D when possible.

D3 Go!: How about sharing some in-game details? What are your MPQ PVP names and Alliance names?

Craig :We can be found in game in the Longbox Heroes Alliance as Whoolly1, Xaos72, Sneakybeat15.

D3 Go!: When did the podcast start and had anyone hosted a podcast previously?

Craig: The show started August 2015. Ian has been regularly featured on the Prodigal Sons Podcast; which is one of our sister podcasts on the “Soon to be Named Network.”

D3 Go!: How carefully do you plan out each show? It sounds like you arrange a schedule beforehand?

Craig: Heh, I do write a template/script, but generally I don’t get it done until about two hours before we record. We generally record on Wednesday nights and then post new shows on Thursday.

Ray: I compile listener comments on Wednesday afternoon, it has become a featured part of the show as we love to hear from our listeners and always encourage comments.

D3 Go!: I enjoy the spontaneity and sense of camaraderie among the team. That said, care to comment on the moments of unexpected singing?

Craig: Heh, I tend to just break into song when something reminds me of lyrics …. I think it annoys Ian something fierce.

Ian: It is most definitely expected since I have known Craig a long time. It’s no surprise that his love of karaoke-themed game shows, and generally singing along, has spilled over into our podcast.

D3 Go!: You’re producing some great ‘casts and your audience seems to be growing. What has been your most popular podcast so far?

Ray: All of our specials have had good numbers, but the interview show with former producer Joe Fletcher has been the most listened to. It was good timing, people wanted to know about the coming events, and we were able to get Joe on just in time to discuss those events. We really like being able to get info to our listeners as it goes live on D3 Go!. The second highest was our special feature about transitioning from 2 to 3-Star characters.

D3 Go!: One of these days, certainly! Thanks for asking. So, do you have an ultimate goal with the podcast? (And what do you find most satisfying about ‘casting? Having fun? Grabbing lots of listeners?)

Ian: *smile* Our goal is to be acquired by D3 Go! or Demiurge, but having fun is the most important.

Ray: We have fun doing it, we talk about MPQ anyway, so why not record it? Having listeners say that they enjoy it is the best part.

Craig: I am just amazed by the fact that people tune in to listen and somehow out there are more people who can play along with my strange sidetracks.

D3 Go!: What’s your favorite thing about MPQ? What keeps you engaged?

Ray: I have always loved Marvel and they way they add new characters will keep my attention for a long time. It’s a match-3 game that you can just pick up and play at any time, but if you want to delve into the powers and synergies, it gets as complicated as you want.

Craig: I enjoy the fact that there is the nice meta-game of powers/combos that are not normally involved in a game of this type, and I have been hooked since Ian introduced the game to me.

Ian: It’s a combination of two things I loved; previous Puzzle Quest games and Marvel, so this was everything that I hoped for. I like the interplay of character powers, and I am motivated by the fact that I am real life friends with most of my Alliance. The constant flow of new characters, updates, and bug fixes keep me engaged.

D3 Go!: And if you could change one thing about MPQ what would it be?

Ray: I have two…a quicker way to sell one and two covers, I can never use the “Sell All” button since I am saving covers for Championing and awaiting Roster Spots (“here here!” says Craig). The other is a better way to get Iso.

Ian: I play on Steam and would love to be able to save it to Facebook so that the same account can be used on Mobile. I would give the person who makes a purchase more CP than the reward they provide to their Alliance. Also, the amount of Iso you get for a real dollar purchase needs to be increased. Right now it isn’t proportional, to say, a Hero Point purchase.

Craig: For the love of Pete, can we please get rid of the incremental leveling of characters? I hate holding down the button to level. Can we please just make it that I push it and it increases the character one level at a time?

Craig; Heh, for me, as all our listeners know…I am wedded to Iron First, Scarlet Witch, and Luke Cage.

Craig: I am going interject – I hate all of you and your Old Man Logans…

Ray – I am just starting with getting my 4-Stars playable. I do have Wolverine (X-Force) Champed, and I like him with Iron Fist, and any boosted red character like IMHB. However, my “go-to team” is 3-Star Cap , SWitch, and ‘Hood. But I have been swapping IM40 for ‘Hood due to his AP generation.

Ray: Our Alliance took it to a vote which ended up 11-9, so we ended up Team Iron Man. I think I would side with Cap, but I enjoy Iron Man in the movies which makes it hard to choose. But I guess that is the point.

Craig: Sadly, my Alliance went with the big government disaster that is Team Iron Man. But hey, it got us a lot of IMHB rewards so that was fun.

D3Go!: Any final thoughts before we close out the chat?

Craig: We would like to thank you for the interest in our show. We encourage everyone who listens to become part of the show and send us comments/questions. We have nothing without the listeners. And we want to thank D3 Go! and Demiurge for the opportunity and interest and for making and producing such a great game.

D3 Go!: It’s a pleasure. Thanks again for talking with us today, PW3 team!

We recommend everyone reading this hops over and has a listen to the podcast. New episodes usually arrive on Thursday, so get in-the-MPQ-know with the show!