The last hope of the Korbinite people, Beta Ray Bill was genetically and cybernetically enhanced to be the perfect warrior. This Worthy warrior is the newest 5-star character to come to Marvel Puzzle Quest! Learn more about Beta Ray Bill (Korbinite Cyborg) in the latest new character developer blog! 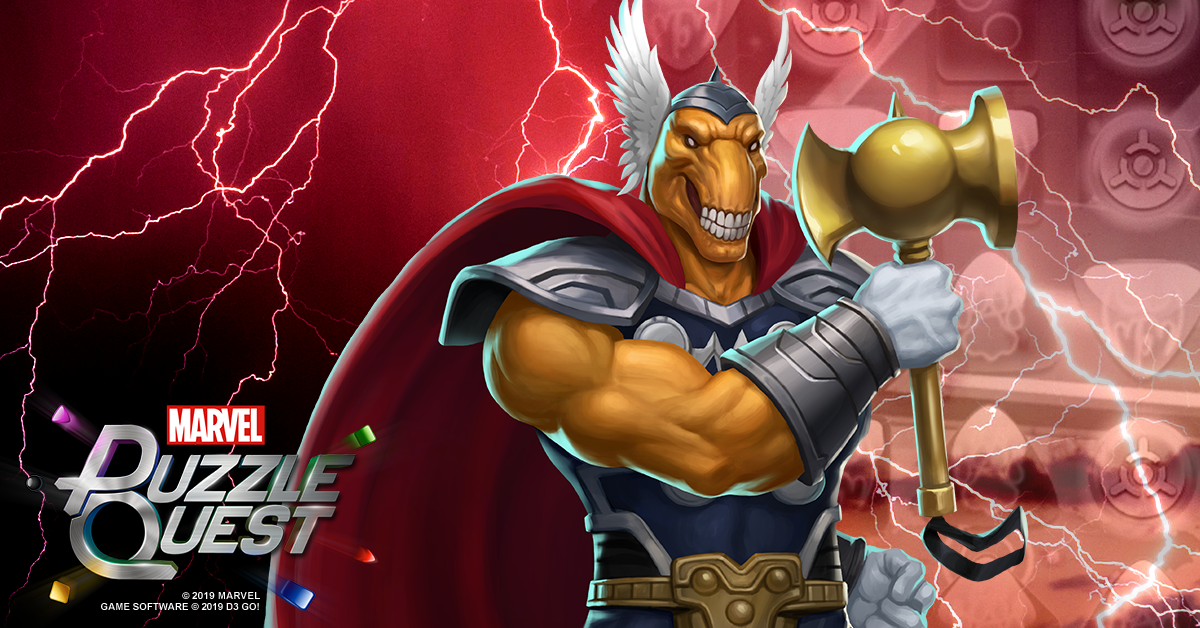 Coming hot on the heels of another fantastical character, M.O.D.O.K., Beta Ray Bill brings his nigh-indestructible might to the battlefield of Marvel Puzzle Quest. Not only does Beta Ray Bill battle using his Odin-forged twin of Mjolnir, Stormbreaker, but he also brings his trusty ship Skuttlebutt to pound on his opponents from far above.

In gameplay, something that was very important to us was to capture how durable Beta Ray Bill is. In the comics, he is unrelenting to the point of being unstoppable. Not only is he durable, but he summons strength from his inability to yield to his foes. He starts the battle by dropping multiple Protect tiles and lets you generate AP whenever a friendly Protect tile is destroyed, forcing your enemy to decide whether or not to reduce your defense since it will then boost your ability to strike back. Once you activate his Clash of the Worthy Blue power, he starts placing Protect tiles when his allies take damage, giving a nearly assured boost to the team’s defenses. If you team him up with his 5-Star brother (from a different mother) Thor (Gladiator), he can soon make all those Protect tiles into Strike tiles which will ensure that their enemies are defeated many times over.

His Blue and Yellow powers play into this comic story by creating Protect tiles at the start of battle and when he and his teammates are attacked.

Beta Ray Bill has been a developer favorite for a while and we’re excited to bring him into the game. The artists and staff have had a lot of fun developing the fan nicknamed “Horse-Thor”. There is something so appealing about a character that looks like an alien horse who is as strong as the God of Thunder. Whenever a new revision of the art came from the artist, we were all very excited to see how he was shaping up, and he is truly something to look at now.

A fun easter-egg: When we were designing Star-Lord in early 2015, we wanted to name the most “ridiculous” Marvel characters for his Oldest Trick in the Book power. At power level one, The power reads: Star-Lord points past his enemy and shouts “Hey! Is that Beta Ray Bill?” before swinging in with a sucker-punch. Three and a half years later, when the enemy looks over their shoulder, they may see Beta Ray Bill on their team.

We really hope you enjoy his release in Marvel Puzzle Quest and we look forward to everyone’s feedback.  To learn more about his powers, please visit our FAQ HERE for more details.