Seems we were just dealing with Mister Sinister here in Marvel Puzzle Quest land. Well, now we have a man who has dealt with his schemes all his life. Alex Summers, also known as Havok, is the newest 5-star character to come to Marvel Puzzle Quest! The little brother of long time X-Men leader Scott Summers, Cyclops, Alex has had a lot to live up to. Learn more about Havok (Classic) in the latest new character developer blog!  And be sure to check out the very first 5-Star Versus Tournament, titled Wreak Havok on March 1st. 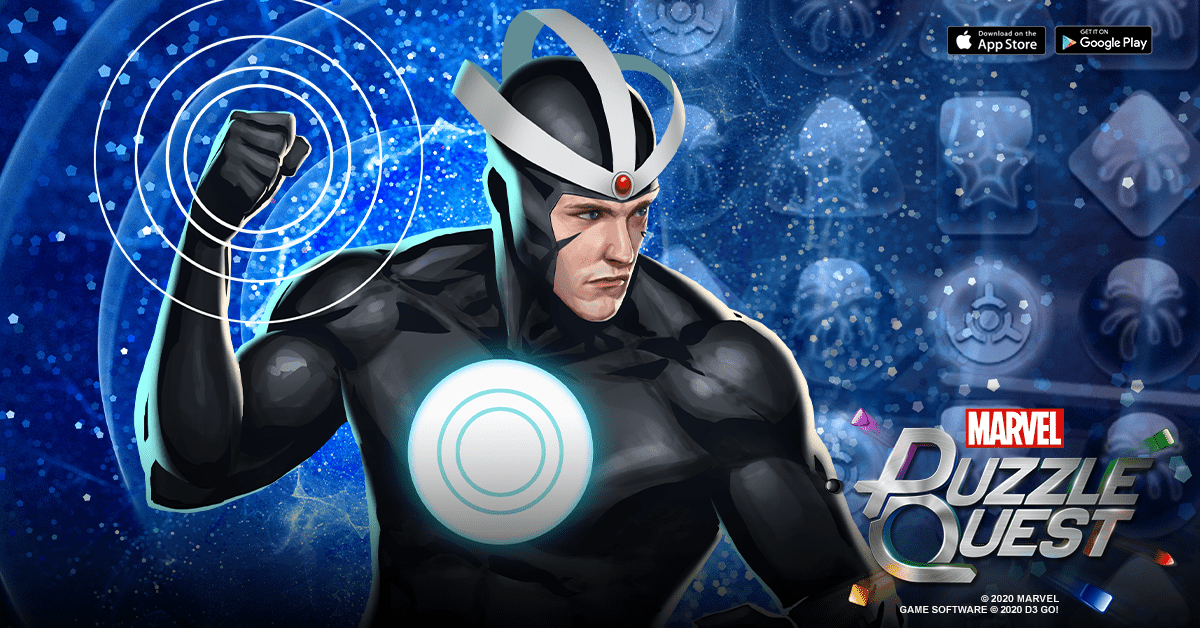 Unlike his brother, Alex never really had a guiding light to help him with his mutant powers. Seemingly orphaned as a child, separated from Scott, and with his powers rendered uncontrollable by not only Mister Sinister’s meddling but intervention by the Living Pharaoh, Havok pretty much had to figure things out on his own. Although he did gain help later on in life, this means that he hasn’t had the time or training that his brother has had in controlling his energy output, making his hero name Havok true to his effects. Despite all this, Havok steps up whenever needed to lead and provide support to his friends and allies in the X-Men and X-Factor.

In-game, Havok is primarily about dealing damage, and dealing a lot of it. He’ll work well with allies who can protect the team so that Havok can let loose with his powerful blasts. Much like in the comics, he works best with a well-rounded team. He functions well with allies who complement his direct offense with a bit of defense or with some ability to incapacitate enemies. As such, his abilities aren’t the quickest off the draw, but they do deal with situations with some finality when he’s ready to let loose.

For only 9 Red AP, Havok blasts out a beam of high energy plasma that deals strong damage to any opponent. This ability ignores Protect tiles, so opponents like Beta Ray Bill that rely on these to reduce incoming damage just get demolished by the ability.

One interesting consideration while creating Havok was keeping his classic look but making sure he fit into the game. His fancy headgear and minimalist costume are a big part of his character, and a great example of the comics aesthetic from when he was first introduced. We really wanted to make sure Havok fans felt represented while having him look approachable and appropriately weighty. There were also the circles that were such an effective way of demonstrating his power on the pages of the comics. Those visual motifs were so strong in the comics you could practically hear them; We *had* to incorporate those in his abilities.

Cry Havok is a combination of tile destruction and team damage ability. Havok blasts away at his opponents, destroying their Attack, Protect and Strike tiles, and even blows them up even if they are Fortified, which is usually a great way to keep them stable otherwise. As a result of this destruction, he deals damage for each tile, then blasts the enemy team for even more damage afterwards. This represents his ability to get into the thick of a fight against multiple enemies and just let loose with waves of powerful energies that disrupt their ability to counter attack… or even attack if they are incapacitated by his power. Eagle eyed viewers may also note a bit of a Shakespearean reference in the power name itself.

Havok’s third ability is Radiation Absorption, which lets him use Blue AP to convert Green to Red AP and vice versa as needed. One of the interesting design challenges with Havok was trying to represent part of his mutant ability that absorbs cosmic energy, while still making that power relevant to the gameplay in MPQ. We didn’t want to create some other cosmic energy source, but AP is a pretty good metaphor for accumulating internal and external power. Given Havok’s ability to channel his plasma in different ways, having a way to direct your AP and convert from one to another felt right.

Havok is a pretty honest and upfront guy, so there’s not a lot of sneaky synergies with him. One thing he does excel at is getting rid of defenses: thanks to the massive power he commands, he can destroy or ignore enemy Protect tiles, so he’s good at cutting through teams that rely on those. He also hits hard, so characters with low health might not last long against him. This puts him into the front lines of most teams as a strong power dealer, and as stated before, his strong striking power means you’re going to need good defenses to keep him up long enough to blast away at opponents. So somewhat strangely, he’s great at blasting down the likes of Rescue or Beta Ray Bill, but also works extremely well with them when paired up together.