Terri-what? Proving that not every member of the Attilan royal family needs Terrigen Mist borne powers to be a force of nature, Karnak brings his ability to see the flaw in anything to bear on the enemies of S.H.I.E.L.D. in Marvel Puzzle Quest. Meet the newest 4-star character to come to the game! Learn more about Karnak (The Shatterer) in the latest new character developer blog! 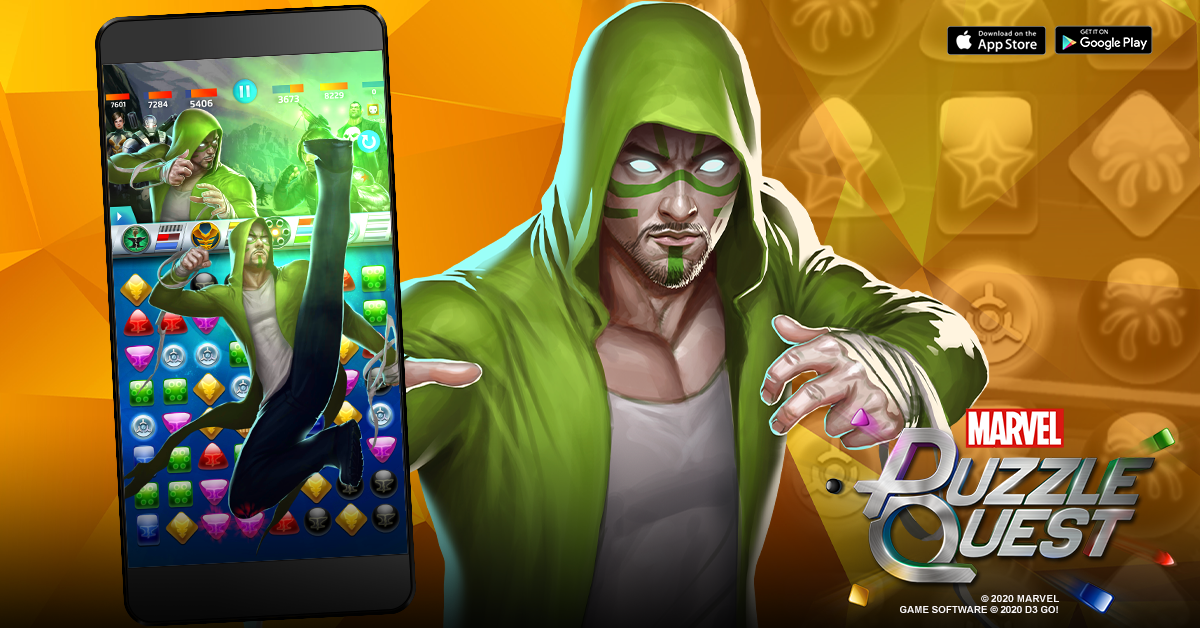 Far from the schemer that is Mister Sinister, Karnak Mander-Azur prefers the direct route to solve problems. Usually by punching them till they stop being problems. That’s not to say that he isn’t intelligent; as one of the leaders of the Tower Of Wisdom, he is a master not only of combat, but also meditation and introspection. It is through this ability to see the one-ness of everything that Karnak is also able to see how to break them apart, usually with a single strike. This makes him one of the most deadly opponents that can be faced in direct combat.

In contrast to the previous release of Mister Sinister, Karnak’s abilities in-game are more straightforward. As a protector, he starts a match analyzing his opponents and keeping his teammates from harm before committing to action. Once he has seen what his opponents can do, it’s a simple matter for his strikes to take down an unwary opponent. Defeating opponents through superior offense is the quickest way to victory for the Inhuman Royal Family, and Karnak is a past master.

Karnak works well with teammates when necessary, but is extremely capable of taking the fight to the enemy by himself. When paired with other characters that create Critical Tiles such as America Chavez or Bullseye, Karnak can deliver strikes that can destroy huge chunks of the board, as well as the opponent’s health. By himself, simply by waiting for a few turns, he can create openings to do the same, following up with strikes that deal massive damage each time he matches tiles on the board. At max level, his matches do a stunning 560% additional damage!

Not content to just pummel his opponents after watching them for weaknesses, Karnak can also manipulate his surroundings to bring about the downfall of his opponents. Shatter exemplifies his ability to sense the weakness in everything, allowing him to attack portions of his surroundings to then cascade towards his real targets. This ability can be used in-game to either blow up portions of the board with Critical tiles or to target specific tiles and set up cascades that will then deal even more damage. As a result, Karnak provides massive board control as well as strong single target damage capability.

Karnak works well with many other characters that also generate Critical tiles, such as America Chavez, Hawkeye, or Spider-Man, to name a few. With those teammates, strikes such as Shatter and Exploit the Flaw are prime methods of dishing out damage. But even by himself, usage of abilities like Probing Strike allow him to set up things for destruction himself. Dealing some direct damage, Karnak then generates his own Critical Tiles which can then be matched with his increased damage for massive hits or destroyed with Shatter to destroy the opponent under cascades of tiles.

One idea we toyed with was having Karnak create a Critical tile the turn after he did match damage. While this captured the story of discovering a flaw and acting upon it, it had problems with making it feel good (never creating critical tiles at low levels and creating too many at higher levels). We eventually settled on a mechanic where he discovers ALL the weaknesses on the 4th turn, which helped ensure that players would get to take advantage of his weakness-sleuthing more often.

Making Karnak in Marvel Puzzle Quest was a challenge in creating a character that *could* work with a team but largely does his own thing. Many times this results in a character that’s either too insular and doesn’t synergize, or one that just makes a team too powerful as a result of giving the new character enough kit to be self-reliant. Karnak rides this line well, being a hero that can take down opponents on his own with a bit of patience, but with some help from friends will really shine.