Fury, we have a situation. Whether that situation solves itself, or needs some tender loving care often stops with Nick’s right hand, Maria Hill. A former marine that has been living the S.H.I.E.L.D. Agent life for years, Maria is the newest 4-star character to come to Marvel Puzzle Quest! That situation that Fury was just apprised of? Maria can probably take care of that herself. Learn more about Maria Hill (S.H.I.E.L.D. Operative) in the latest new character developer blog! 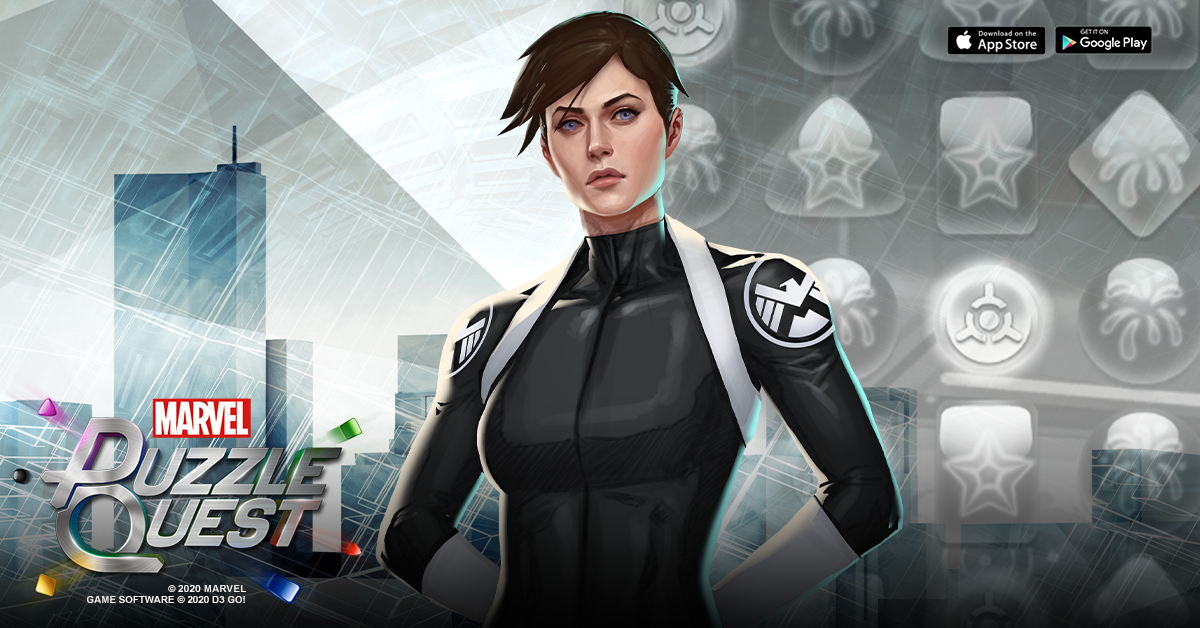 Maria is a former Marine who turned S.H.I.E.L.D. Agent. It didn’t take her long to gain rank to the point where, in the comics, she takes over S.H.I.E.L.D. after Nick Fury leaves. Things under her leadership don’t always end well, but you can’t fault Maria as she always has “what’s best” in mind (even if she often finds herself on the wrong side of the conflict in the end). Like other S.H.I.E.L.D. Agents, she has a wide array of gadgets and tech at her disposal and we took full advantage of that when designing her character. We definitely wanted to bring that across in her Marvel Puzzle Quest incarnation and made it a focus of her in the field personality in the game.

Maria is a mix of combat support, direct, and indirect damage in game. Much like her comics personality, her opinion is that the best defense is a good offense. With some of the strongest Strike tiles in the 4-Star tier, Trap tiles that rival Jessica Jones’s damaging investigative skills, and the ability to sneak out of the combat to set up other attacks, Agent Hill is more than able to bring the battle straight to, and through, her opponents.

Best of Intentions represents Maria Hill’s propensity for making and executing plans that *should* work out perfectly for everyone involved, but don’t always account for all the possibilities. Usually, this will end up just fine, but every now and then there can be some unintended blowback in the process of the plan’s resolution.

In-game, this translates to creating a number of powerful Strike tiles, which increase the damage of all matches your team does as long as they’re out on the board. In the 4-Star tier, few can come close to matching this with the low amount of AP used to create them. The downside is that it ALSO creates a Countdown tile on the board that will deal 90% of Maria Hill’s life in damage to herself if it goes off. High risk, high reward, all style.

And here’s where Maria shows her adaptability in dealing with the fallout from anything that goes awry. We’ve set up the bomb to take out the enemy base, but weren’t expecting Taskmaster to be guarding the exit! What now?! JETPACK! Mechanically, this lets Maria deal a parting blow to her opponents for a bit of damage while she then goes Invisible for a few turns, ignoring any damage. Which includes that Countdown tile from Best of Intentions!

Maria’s Get Out Alive power originally sent her Airborne. The thought was, this would allow her to dodge the self-damage from the countdown created from the Best of Intentions power. However, due to how Airborne functions in the game, her Countdown tile would never count down. In Marvel Puzzle Quest, Countdown tiles from Airborne characters do not countdown normally. It is part of what makes Airborne a unique state. It seems not even the default functionality of a Jetpack can save you from the consequences of your actions!

Thirdly, we have Maria making use of the vast stores of a S.H.I.E.L.D. specialty, the Life Model Decoys. With these android/clone/robot/things, Fury and Hill have lived through any number of assassination attempts while setting up for a powerful counterattack. In-game, this results in Maria placing a number of Trap tiles on the board representing the LMDs while she sets up to snipe whoever comes after them. On a match of these tiles from either team, a large amount of damage is dealt to the poor sap that’s in the front of the opposing team. Best offense, indeed.

We really hope you enjoy her release in Marvel Puzzle Quest and we look forward to everyone’s feedback. To learn more about her powers, please visit our FAQ HERE for more details.