World breaking power from beyond the Green Door, the Immortal Hulk leads us back down to a more “normal”, simply planet shaking threat in the form of one of the most powerful race of shape-changers ever encountered. At the apex of even their vauntedly aggressive race, Kl’rt, the Super-Skrull himself is the newest 4-star character to come to Marvel Puzzle Quest! Imbued with the powers of Marvel’s first family, the Fantastic Four, and losing none of his race’s ability to shapeshift or infiltrate, Super-Skrull’s mutability is second only to his ambition. Learn more about Super-Skrull (Classic) in the latest new character developer blog! 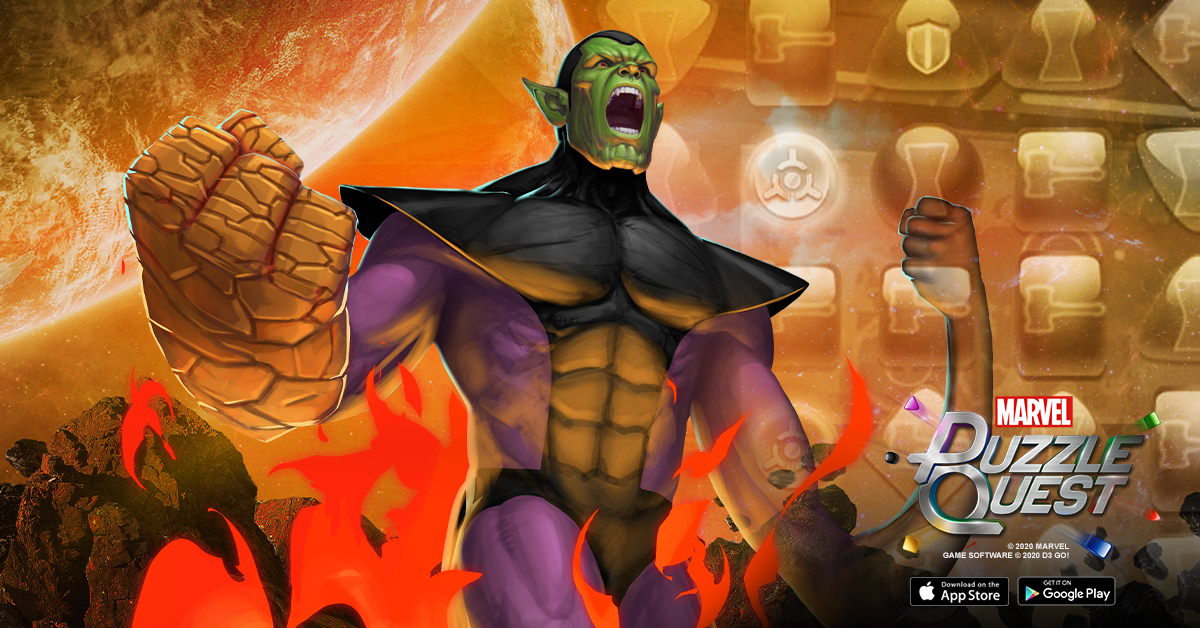 Super-Skrull is a one-man/Skrull wrecking machine! It seems unfathomable that one being could wield the power of not one of the Fantastic Four, but all four! Usually, the only way he can be beaten is… when he beats himself. Hubris gets the best of most villains. That doesn’t mean that his plans and schemes aren’t dangerous, as he can and has caused untold damage to the regimes of multiple worlds before being unleashed on Earth.

Easily one of the most complex characters in the game with 7 different abilities, many of them interacting with one another, Super-Skrull is certainly not a simple being. Either in-game or in the realm of comics. We decided to go down the route of representing all his powers separately to really highlight the fact that his abilities are multifaceted. Sure, we could have had one that works sort of like Doctor Octopus; Placing an Invisibility tile at the same time as direct damage, protection, and indirect damage, but it doesn’t really get across Super-Skrull’s overall adaptability. Super-Skrull’s Manifest Entity power allows the player to select 1 of 4 powers. Players have never been able to view every state for powers that can change during a battle, but Super-Skrull really highlighted the need for this. We’re adding this ability soon!

This is Super-Skrull’s keystone ability, bringing together all four of the Fantastic Four’s powers in one move. When players select this, they can then choose from amongst the four. Choosing Invisible Woman creates an Invisibility tile for Kl’rt to avoid damage. Mister Fantastic creates Protect tiles that will overwrite enemy special tiles for not only added defense but also to prevent the opponent from capitalizing on their strengths. The Thing brings brute strength, proving multiple strikes of damage and adding some bonus Attack tiles if those pummeling blows downs the opponent. Meanwhile, the Human Torch brings a Repeater tile that creates constant Attack tiles to the board every turn, making it difficult for opponents to avoid constant damage. Attack, defense, avoidance; Whatever you need, Super-Skrull is capable of bringing it.

Inevitable Betrayal marks the third occasion of a character able to shapeshift into their opponents, and the second Skrull in MPQ to do it, behind Talos. However, while both Skrulls do shapeshift, they use this ability for very different goals. Talos, ever the master spy, utilizes his ability to infiltrate to steal opponent AP and keep them from fighting as effectively. Super-Skrull on the other hand uses this to leech his opponents of their fighting ability by inducing constant paranoia, which we represent in-game by taking away small amounts of their life each turn Kl’rt is shifted. He also has a Passive portion to this ability that works extremely well with Doctor Strange. Whenever an opponent fires an ability while he is shifted, he’ll improve friendly Strike, Attack, and Protect tiles. So Strange will heal the team, deal some damage, and Super-Skrull will ensure that continued plans go off even better than before. So for all that the Super-Skrull usually works best alone, he definitely has abilities that mesh very well with other characters.

The design of Super-Skull showcases his ability to self-combo his powers. Want to have improved Special tiles? Create them with The New Hotness’s Repeater tile then buff them by shapeshifting into the enemy. Want to protect Super-Skrull while he is shapeshifted? Make him invisible with Now You Don’t. You can create a larger cascade by firing Force Multiplier after stealing the enemy’s Special tiles with Inevitable Betrayal. But by then making use of “allies”, he can become even more powerful. Bring out Rocket and Groot’s powerful Strike tiles at the start of the battle, have Skrull shapeshift into opponents, then bring even more pain when they inevitably cast a single power out there. Then make use of those stronger tiles by using Kl’rt’s The Thing ability to dip multiple times into the damage those Strike tiles give you as he hits the enemy 2-3 times with his giant sized mitts. Playing with Super-Skrull lets you take on whatever the enemy throws at you.