From someone as human as they come with Maria Hill to someone who has often transcended that state through gamma radiation, Bruce Banner, the Immortal Hulk is the newest 5-star character to come to Marvel Puzzle Quest! Now seemingly unkillable, the Hulk has had to face down not only his own demons but also literal ones in the discovery of the source of his gamma powers. Learn more about The Hulk (Immortal) in the latest new character developer blog! 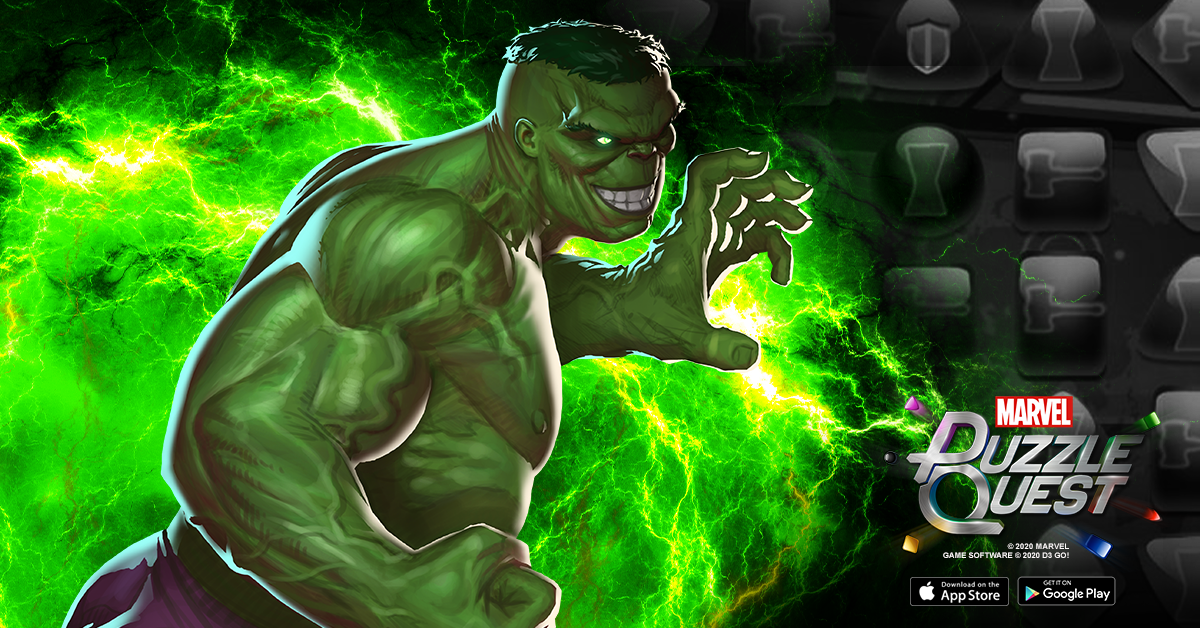 The Immortal Hulk is a really fun comic series because of the different scales of drama and conflict it hits. It starts off being about Bruce Banner’s not being dead when everyone thinks he is and dealing with the consequences for how he treated people in his life. This leads to him being haunted by what he believes is the ghost of his abusive father. It then escalates into something much more sinister with the Immortal Hulk facing off against literal demons, devils, and increasingly dangerous existential threats. It then reveals a great deal about the nature of the Immortal Hulk’s power and his ultimate destiny in a super unique and slightly disorienting comic issue (#25, a personal favorite).

Bringing this flavor into Marvel Puzzle Quest was an interesting challenge. The Hulk is always a powerful character in our game, so how do we make him strong enough to take out threats to the universe while still making him have an approachable power level? What we decided on was to make the Immortal Hulk a fantastic damage dealer and escalating threat. He thrives on a team which can support his black ability through either defensive utility or massive health pools. He is also great alongside anyone who can shake/shuffle the board, causing him to make more matches. The more matches the Immortal Hulk makes, the faster he can die – which in his case is actually a good thing!

The Immortal Hulk has had many iterations in terms of the art style. His initial art direction ranged from a cosmic being along the lines of Galactus to full-on Cronenberg-style body horror. Some of the initial sketches were so gross that people at the Studio had reservations on seeing the in-progress art. This really speaks to the artist’s ability to depict the source material, which we’re really proud of our artists for being able to do!

The Immortal Hulk’s kit largely relies on his ability to get more powerful as he is attacked and takes damage. Tying into that body horror, we decided to make it the base of one of his core abilities in that every time someone thinks that they’ve finally taken down the Immortal Hulk, he reforms ever stronger. This manifests in-game with a growing buff to his base match damage every time he’s taken down. This version of the Hulk is less discriminate in his targets however, so every time he makes a match, he deals a little damage to himself and on a rebirth, damages his teammates in the confusion of his bodily reintegration. This makes his abilities have a double edged sword. Massive damage, massive threat to everyone, including his erstwhile allies.

Neat bit of art trivia for longtime players of the game: What Does Kill Me contains limbs from other Hulk incarnations from within MPQ!

Sometimes we make complicated characters, and other times we make simple characters. Fundamentally, The Hulk is a simple character. He has one goal, deal as much damage as possible, even at the expense of his team, and even in death. Breaker of Bones embodies the first part of this while possibly causing the second. It deals massive damage to a single opponent, but also damages the Hulk himself when used. This can result in his own “death”, which then hurts his allies when he comes back from being Downed. As another art nod, the art (and name) for Breaker of Bones is based on his Breaker of Worlds form from issue #25.

With his unconventional combat tactics, the Immortal Hulk takes a bit of outside the box thinking when considering characters to team him up with. He’s a fun combination with 5-Star Carnage who makes Attack tiles that can hurt the Hulk and also can make matches, which if in the Immortal Hulk’s colors, allow him to deal big damage and die faster. God Emperor Doom is also a great choice, as he’s able to not only heal his team after Hulk’s post death antics, but also shake up the board to make even more matches for the Breaker of Worlds. There is also a fun undying/immortal team using the Immortal Hulk, 5-Star Loki, and 5-Star Jean Grey. You can also pair Immortal Hulk with characters that go airborne, such as Vulture, who can avoid the damage from the Immortal Hulk’s revival.