Hailing from the Scottish highlands and educated at the Xavier Institute, Wolfsbane is ready to lead her pack as the newest 4-star character in Marvel Puzzle Quest! Learn more about Wolfsbane (Rahne Sinclair) in the latest new character developer blog. 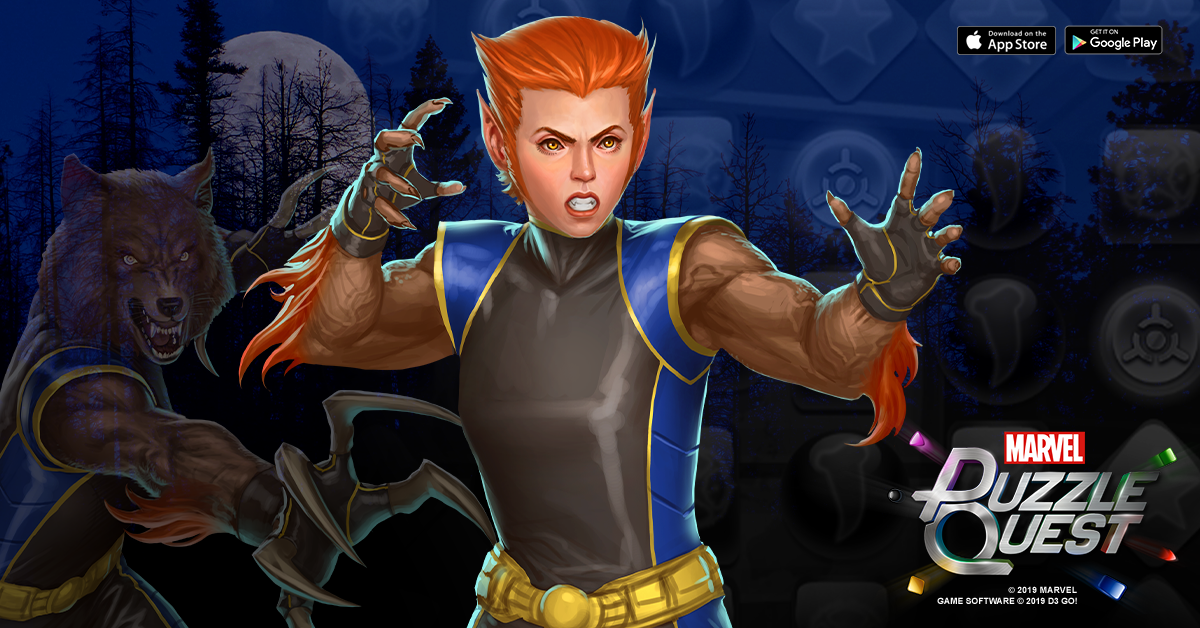 Rahne Sinclair was an interesting character to bring into the Marvel Puzzle Quest universe. Unlike some other characters, Rahne’s upbringing was a very difficult one. As a result, she faces a lot of personal demons as she goes about her life and work. It’s interesting to bring characters to life that are more human than some and provide rich stories to tell with their personas in-game. What’s more human than a mutant that can explode into 5 hive-mind controlled wolves?

In MPQ, Wolfsbane is a damage dealer that serves as a great back line attacker while paired with a tanky front line. For a new player, her black ability Rend is capable of dealing with PVE waves pretty quickly. However, her overall HP is low, so she works well in more of a hit and run aspect, with her making attacks when no major abilities are incoming and using the other half of her Rend ability, Silent Retreat to stay invisible and avoid enemy attacks. This speaks to her hunter aspects used throughout her runs in the comics.

More recently, she’s gained the ability to split into multiple wolves to hunt down her enemies. We wanted to represent this in the game since it’s an extremely cool ability, but it took a bit of finessing to make it feel awesome. The imagery of a wolf pack attacking an opponent is one of several wolves leaping in for a strike in sequence instead of just one powerful attack. This lent itself well towards the Countdown tile mechanic in the game, causing the One Woman Wolf Pack ability to place multiple Countdown tiles on the board that each go off on different turns dealing additional damage. This power really shows off what Rahne has been capable of in more current comics.

We really hope you enjoy her release in Marvel Puzzle Quest and we look forward to everyone’s feedback.  To learn more about her powers, please visit our FAQ HERE for more details.