Not all villains are always scheming to take over the world. Some of them aren’t even really villainous per se. Things are always in the eye of the beholder. Some villains, at times, can even take steps on the path of light. Our newest 5-Star character in Marvel Puzzle Quest, Yelena Belova, inspired by Marvel’s Black Widow, is certainly one of those. She may have assisted Norman Osborn in the Dark Avengers, but at times has also assisted the likes of Nick Fury, Natasha Romanoff, Daredevil, and the Thunderbolts in their missions. Learn more about Yelena Belova (Black Widow) in the latest new character developer blog! 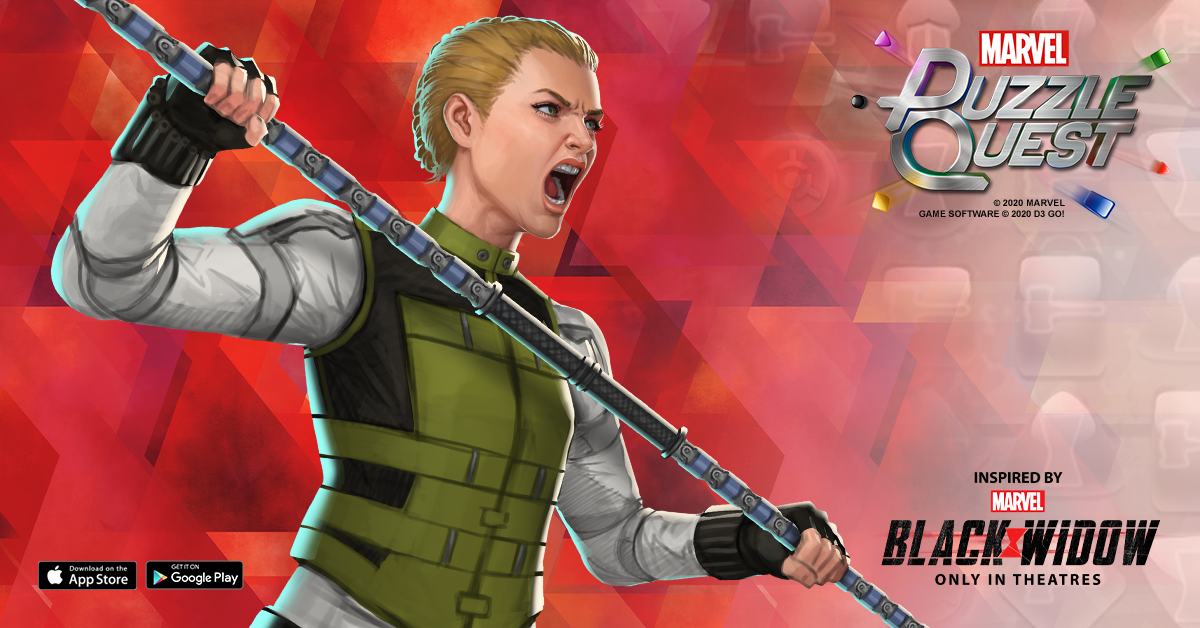 Yelena Belova scored the highest marks in her class while in the Red Room. Unfortunately for her, once out in the real world, Natasha Romanoff showed more capability and set Yelena back a step. Always in Natasha’s shadow, Yelena Belova has worked hard to master her skills and escape to be her own woman. Whether this has meant as a spy, or a successful model, Yelena has always tried her hardest. Inevitably however, her paths cross with Natasha and she’s humiliated as the number two time after time. That causes a huge amount of envy that has put her at violent odds with her Red Room sister on a constant basis. Yelena is a bit of a “what if” story. What if the Black Widow never went rogue? What if the Black Widow stayed loyal to her country? It’s this relationship to Black Widow that makes her such an interesting character.

Spycraft, Yelena’s Purple ability, takes heavy advantage of Trap tiles to keep the opponent off kilter. It makes Trap tiles in the opponent’s current strongest color that, when matched, deal a bit of damage and converts AP from that color into the opponent’s weakest color. Captain America expecting to bust out a Rope A Dope and hit your teammates? Not happening while Yelena is around. Converting to the weakest color means that unless the opponent has a rainbow team, this AP is essentially going to waste. With a single cast of this power, Yelena is easily capable of shutting out the opponent’s largest damage dealer from using their ability.

We knew we wanted a BIG gun for the Military Surplus pose. We first landed on a Rocket Launcher, but had difficulty finding the right type of gun. We toyed with the idea of a generic Rocket Launcher like one that Nick Fury had used in a previous film. We began to look at other high-risk weaponry like grenades as well. Once the Black Widow trailer dropped that showed Yelena wielding a super-powered futuristic looking gun, we knew that we wanted to use that weapon right away. Sometimes, we learn things about characters at the same time as the players!

When designing Yelena, we knew that we wanted to create a character that felt similar to our other Black Widow characters, and still reminiscent of her 1-Star variant. The big difference between Yelena and Natasha is that Yelena is a bit rougher around the edges. The ability to move AP from the enemies strongest color to their weakest color was an opportunity to manipulate the enemy’s AP in a significant way, but exposing herself in the process. Her low health is another aspect of this, as she is capable of bringing a lot of chaos to opponents, but a few good hits on her will take her out of the action. Someone with strong Protects like Beta Ray Bill, or direct jumping in the line of fire like Bishop or Deadpool helps make sure she can keep doing what she’s doing.

We really hope you enjoy her release in Marvel Puzzle Quest and we look forward to everyone’s feedback. To learn more about her powers, please visit our FAQ HERE for more details.

And don’t forget to check out Marvel’s Black Widow, in theaters November 6th.