In this post, Thiago Januário (Artist at Oktagon Games) is going over his experience in creating the original artwork for the Planeswalkers from the Puzzle Masters (PMA) collection. This set is exclusive to Magic: Puzzle Quest and counts 5 Planeswalkers for each color. 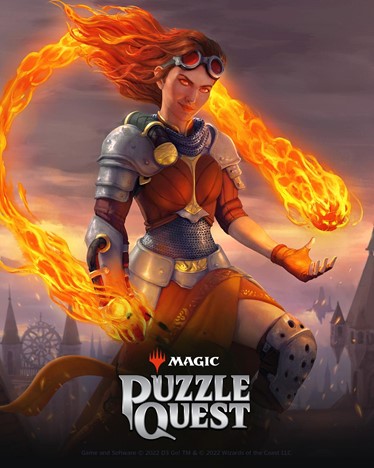 “There is no virtue in subtlety – at least not as far as Chandra Nalaar is concerned. She’s a confident, ardent, defiant Planeswalker whose specialty is pyromancy: spells of fire, fire, and more fire.”

When you destroy one of your Activated gems: Fetch the first Spell card from your library. This effect can trigger up to 1 time(s) per turn.

(White) “At the beginning of your turn: Your Red mana bonus is increased by 2 until end of turn. 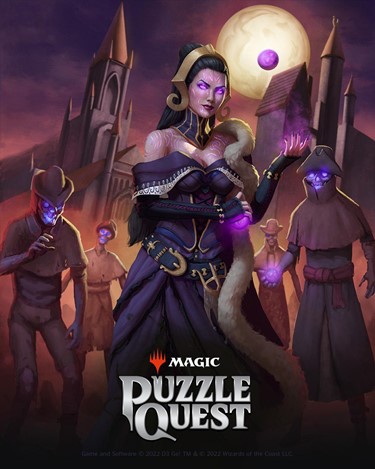 “Many fear the cold and cringing clutches of death. Liliana is no different – she knows how powerful and frightening death can be, and she uses it. As a weapon, as a tool, as a means to an end. Liliana will not be surrendered by death: she’ll master it.”

When a creature you control with Buried dies: It gains half of its mana.

(Black) “At the beginning of your turn: Your Black mana bonus is increased by 2 until end of turn. 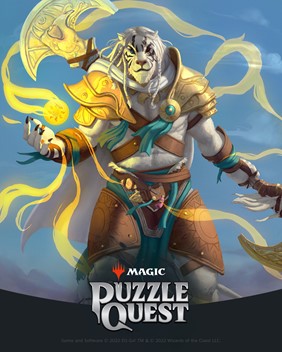 “Long ago, Ajani Goldmane learned that fighting is not always the answer. Through this lesson, he evolved his sense of justice, his strength, and his wisdom, molding him into a great leader and advisor. Sometimes, however, the fight comes to you. When that time comes, Ajani will not hesitate to lead his allies into battle!”

At the end of your turn: If you have full life — Create 2 Ajani’s Soldier Tokens. Otherwise: You gain 3 life.

(White) “At the beginning of your turn: Your White mana bonus is increased by 2 until end of turn.

“Motivated to guard all life nurtured by the multiverse, Nissa Revane will even use her vital energy to make life flourish in the most unlikely of scenarios.”

When you make a 4 or 5 match by swap: Seed 2 gems. When you destroy a Seed gem: Seed 2 gems. This effect can trigger only once per turn.

(Green) “At the beginning of your turn: Your Green mana bonus is increased by 2 until end of turn. 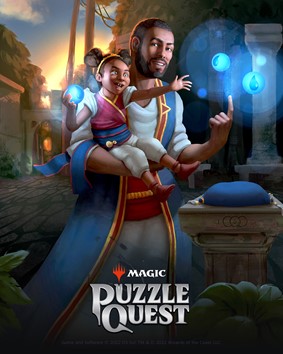 “Wise, powerful, and above all, kind. Famous for his deeds throughout the wide multiverse, Teferi always has time in his hands. Even so, he’ll do whatever it takes to prevent and stop any threat from reaching his daughter, Niambi.”

When your opponent casts a card: If that is a Blue card — Gain 2 mana. Otherwise: Deny a gem.

(Blue) “At the beginning of your turn: Your Blue mana bonus is increased by 2 until end of turn.

Painting Chandra, Ignite was very important because it was the first Planeswalker from the Puzzle Masters collection. Through this painting, we tested how far we could go, and how to adjust the entire process of the following Planeswalkers. As a player, one of my favorite arts from Magic: the Gathering is Brad Rigney’s version of Chandra, so I felt an initial pressure to try and do something cool with a character I’ve been following since forever. Despite that, all the work was very rewarding and well-advised by the team. I learned a lot about Magic: the Gathering’s universe. As references, I used mainly the arts from the Ravnica plane and the classic version of the character.

All the process of creating Liliana, Master of Death was very cool, from start to finish. Reading her story to build the drawing, researching, and studying other artists’ paintings to understand how Innistrad was in terms of colors, buildings, and clothing. Also how Liliana should interact with them was a massive learning process. The main reference for her was the Gothic City of Innistrad and the sets that the city is included in. Then for the colors and overall feeling of the image, the reference was the battle against Emrakul and Liliana’s zombie army. We wanted to show Liliana’s confidence and cold blood regarding the challenges she would have ahead. In the Magic: Puzzle Quest context, her desire to defeat the next player with her decks. Her superiority, self-confidence, power, and beauty were the main points of Liliana’s aesthetics. One curiosity about the art is the Innistrad’s moon, where the craters form a drawing remembering a crane bird. And the Easter Egg is the Avacyn symbol – very massive in the Innistrad Lore –  on the top right of the painting.

The work on Nissa, Vital Energy was very entertaining since the sketching phase and the choice of ideas. We got some good development possibilities., from her er passages through a few scenarios and Planes of Magic: the Gathering. The chosen one highlights Nissa’s power of creation in the midst of chaos and disasters caused by an opposing force – in this case, Nicol Bolas in Amonkhet. The painting and all the elements were made to highlight this contrast of energies.

In my opinion, Teferi, Chronoclast‘s art is the most special of the collection because it portrays him in a different way than most other arts, besides, of course, Niambi’s presence in the painting. The coolest thing was thinking about the way he would use his powers to play with his daughter. Even his garment is different – based on alternate cards’ arts from Wizards of the Coast. Another aspect I enjoyed working on was imagining what his house would be like in Jamuraa, and the place where he would safely keep his Mana Gems.

In Ajani, Invigorate Leadership‘s art, the most fun part was choosing and working with colors. As the scenario is set in Kaladesh and the art concept is more “positive” – compared to Nissa and Liliana, for example – I decided to choose a clear day with clear skies. The light from the Mana Gem also helped to make everything more alive and rich. Ajani is a character full of details, so painting him with the same care as the collections’ reference arts (having “Aether Revolt” as the main one) was both challenging and rewarding. I really enjoyed the result, I hope it will be a strong Planeswalker and that he will be very present in the game.