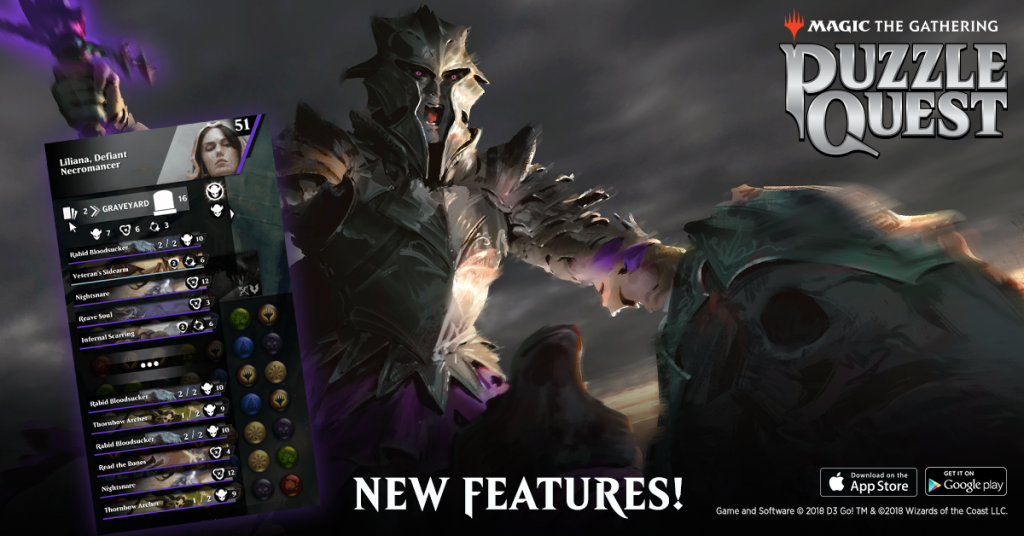 With Guilds of Ravnica’s release date growing near, we took the time to prepare a series of blog posts discussing the new features that the update will bring as well as the set’s mechanics. This particular post will explain the changes to the Standard/Legacy formats and the new Graveyard Display.

We’ve heard the community express some concerns about the Standard format rotating too soon and that it only contains 4 Sets plus Origins. In light of those concerns, we’ve looked into several alternatives, and after much consideration, we’ve decided to adhere to Wizard’s own Standard format with a slight addition.

Standard in MtGPQ will follow tabletop MtG’s own Standard format with the single difference of Origins being always available. Sets will be added to Standard until it reaches 8 non-Origin sets. Once the ninth non-Origins Set is added, the oldest four non-Origins Sets will be moved to Legacy. This increases the time a Set stays in standard by an entire year.

As far as Booster Crafting is concerned, the Mana Orb Pricing will remain the same at the moment. Since the Standard side of Booster Crafting has 4 price points, the oldest 4 non-Origin Sets will receive the cheapest price tag of the four. Other than that, no changes will be made to the Booster Crafting. For now.

When looking at Ravnica’s set mechanics, which will be discussed in this series of blog posts, one point was clear: players would need to see their graveyards. With that goal determined, we set out to identify the best manner of presenting information players would need to support graveyard strategies in a way fitting and useful for MtGPQ.

We wanted a simple way for players to access and visualize the interface, which would be tailored to how cards in MtGPQ interact with the graveyard. Here is how it works:

Just access the cards in your hand by sliding it open, then tap the Graveyard icon.

You should be able to easily see both the first few cards that entered the graveyard and the last few cards. Even though we’ve still given you the option to tap the middle section to see your entire graveyard, in most cases, cards that interact with the graveyard in MtGPQ only act on either the first or last cards.

Another quality of life feature added to this UI was the filter/count icons. They allow you to easily see the card count by card type, as well as reorganizing the list to display only cards of one or more types.

It’s also important to explain a couple of graveyard rules regarding Tokens. These cards do not go to the graveyard and instead are removed from the game, so don’t be alarmed when Copies or Tokens don’t show up there.

Just like Tokens, Copies (cards created by the text “create a copy” or similar) are removed from the game after being destroyed, bounced to hand, exiled or discarded. Due to this, they do not count for some effects such as Undergrowth or Jump-start.

Tokens, Copies, Reinforcements and the Graveyard

Now that players are able to see the graveyard, a couple of rule changes were necessary to help clarify and simplify its use.

– Reinforcements that are created through abilities and other effects are considered Copies. This means that they will be removed from the game, if the creature/support they are reinforcing is destroyed or die.

– Reinforcements created by playing cards are not considered Copies. These will go to the graveyard when its reinforced creature/support is destroyed.

– Cards that make you lose reinforcements will start by removing Copies and then move on to non-Copies.

We understand that this indirectly nerfs some Leaders, in particular Squee. In light of that, you can expect changes to some leaders in the near future.

Guilds of Ravnica also brings a new type of card to MtG:PQ that has been present in the tabletop version of Magic the Gathering for a long time, and a staple in the multicolored decks: the Split Cards. In MtG:PQ, they’re special two-in-one cards with two castable sides that can be switched back and forth while in the player’s hand.

Whenever a Split Card card is in your hand, you just have to tap the card and then the flip button on the left side to gain access to its other effects. Tap it again, and it will flip back to its original face. When that card gains mana, both sides gain the same amount of mana, even if they have different costs.

Split Cards offer versatility to any deck. Choose wisely which side to cast at the right moment to defeat your opponents.

The introduction of the Graveyard User Interface, and the expansion of the Standard pool to keep up with tabletop Magic, are features that seek to improve the overall gaming experience.

We are aware that MtG:PQ requires constant improvements to make the game more friendly to new users and veterans alike. Our new updates aim to not only to bring new gaming content, but also enhancements to its system and interface.

We hope you all enjoy them, and have a good time with the Guilds of Ravnica!

Read Part 2 of our developer blog series HERE, where we will take you further into Ravnica and learn about the Guild mechanics. Guilds of Ravnica is scheduled to arrive in Magic: Puzzle Quest next week (week of November 12).