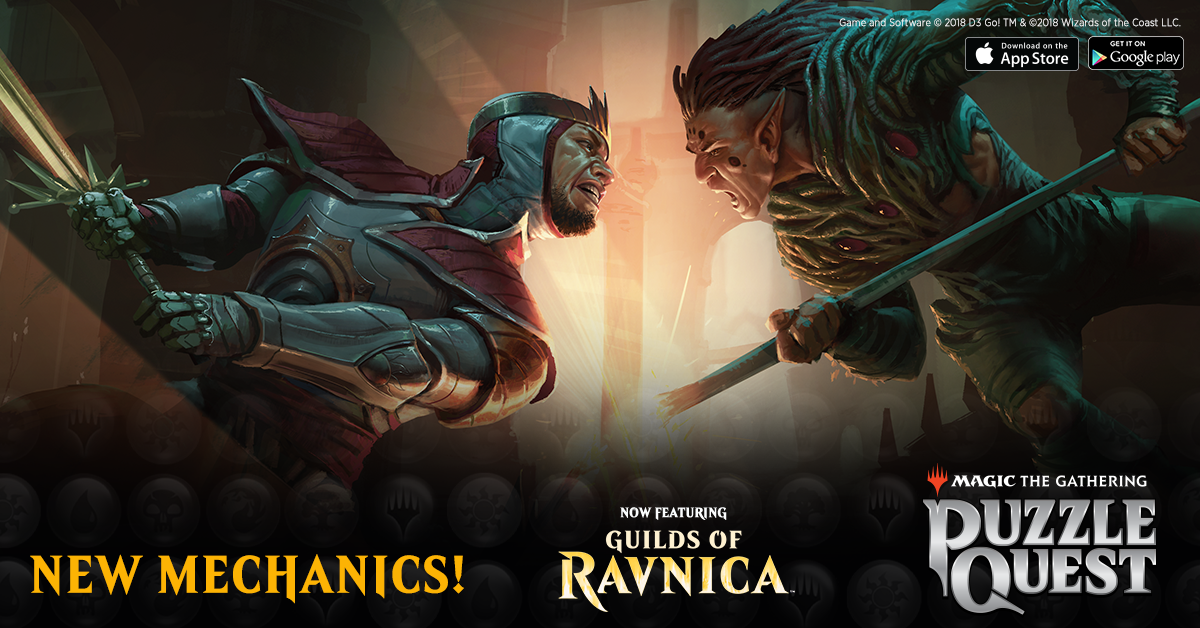 The time has come for MtG:PQ to visit the famous Ravnica; the city where subterfuge and fiendish feuds dwell, yet also where the light shines to bring all dark to life with a jolt of energy. As in previous stays, we’ll find each guild renewed with special tactics and highly valuable strategies – that means new, exclusive mechanics! Furthermore, two new gameplay features have been developed to support these additions: the Split Cards, a staple of the multi-colored format, and the ability to check cards in your graveyard. You can find out more about these features in our previous article.

The House Dimir is, at its core, a spy network. Dealing with information is how they keep their supremacy and control over other guilds. This manipulation is achieved through Surveil, a mechanic that allows you to look at the top 4 cards of your library, then put up to X of them into your graveyard, and the rest on top of your library. It’s a powerful method of scrying, a way to finding specific cards, and enables graveyard strategies to occur.

The Izzet League is comprised of crazy experimenters and scientists of a chaotic nature. They can transform almost anything into energy for another trial run. With Jump-start, you can cast a Jump-start card again from your graveyard by giving that card enough mana. To do this, players must purposefully exile cards that have already acquired mana, and the mana will be transferred to the Jump-start card. It’s a way to double the use of spells, converting bad draws into suddenly impactful plays.

The Golgari Swarm is deeply involved with the life and death cycle, strengthening their ranks and spells through the energy of their previously fallen allies. This is the core of Undergrowth, a mechanism that counts creatures in your graveyard up to the numbered limit, and uses that value as a modifier for its effect. Each card uses this boost differently, but they all depend on the number of non-Token creature cards in your graveyard. Knowing this, rest assured that if your creatures perish in the heat of the battle, they’ll be fuel for your next assault.

The Boros Legion is the living embodiment of justice. Their unparalleled militarized strength relies heavily on coordinated attacks and the wits of its commanders. As such, Mentor is the mechanism that represents this organized incentive: each time a creature with Mentor attacks, creatures under your control with lesser power gain +1/+1 permanently. Prepare your rush with multiple smaller creatures and a Mentor, in order to break board stalls and bolster your troops into dangerous threats.

The Selesnya Conclave thrives off harmony and community, building a mighty force by fortifying their internal structure. That’s precisely how Convoke works. It’s an attribute that considers the amount of creatures and creature reinforcements you control and reduces the cost to cast that card by that value (up to the numbered limit). Build your composition with that in mind, preparing the battlefield with troops to hasten your most dominant weapon faster than predicted, and guarantee your victory.

With these new mechanics, Guilds of Ravnica takes the game to a new level of deck building strategy. We hope that players enjoy this new set, and join forces to defend their favorite guild.

Guilds of Ravnica is scheduled to arrive in Magic: Puzzle Quest next week (week of November 12).